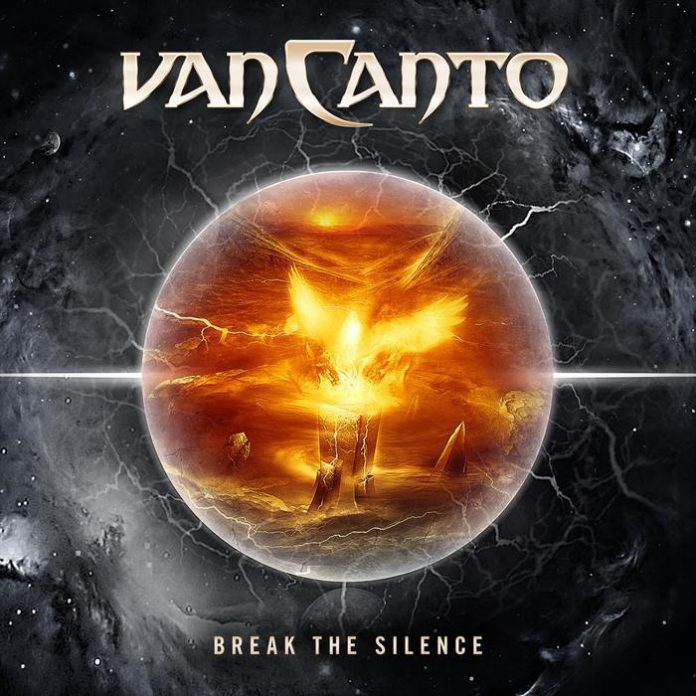 It’s very hard to describe Van Canto to someone who’s not familiar with them. As a matter of fact, some of their videos have become internet memes due to the seemingly ridiculous idea of having someone imitate the sound of electric guitars with his voice. The idea seems silly and the band would have probably disappeared if they had limited themselves to simply cover songs by other bands (as they’ve done with Metallica, Manowar and Nightwish) but they managed to survive and obtain critical acclaim because they’re actually good songwriters. Once you get past the “WTF?!” moment that comes with your first exposure to them, you’ll be able to enjoy it.

This band, self-labeled as “Hero a capella metal”, released their first album, A Storm to Come, back in 2006, followed by Hero in 2008, Tribe of Force in 2010, and now, in 2011, Break the Silence. The fact that it took them less than a year to produce a new release seems weird. Is it any good?

The answer is a resounding yes. And although the album is not perfect, it does show the growth and maturity that Van Canto have achieved since the very beginning.

Break the Silence starts with the powerful “If I Die in Battle”, with a soft beginning giving way to a great power metal song in which the drums and the rakatakatakatakatakataka blend in perfectly. There’s also an unexpected, yet pleasant, guitar solo (yes, an actual guitar). Although this first song sets the bar very high, “The Seller of Souls” not only manages to equate it in quality, but actually surpasses it. It’s the epitome of a Power Metal song.

Sabaton’s “Primo Victoria” is, perhaps, one of the most awaited songs in the album. As it happened before with their covers of Wishmaster and Battery, the fans always want to see how the band will cover a popular metal song. Trying to be as “authentic” as possible, the song includes the participation of Sabaton’s singer Joakim Brodén. Although the idea may have sounded good, it actually makes the cover forgettable and dull. A good cover is supposed to reinvent the song or, at least, offer a different take on the original work. In this case, Van Canto limited itself to simply add some rakatakatakatakatakataka in the background, but otherwise performed a song that barely differs from the original, and that makes you wonder if they simply added it in order to exploit some of Sabaton’s popularity. Alice Cooper’s “Bed of Nails”, also seems to suffer from the same problem, as it sticks to the original a bit too much; however, Sly’s voice manages to give it a more unique touch. True, it’s not as memorable as Battery, but it’s an improvement from Primo Victoria.

“Dangers in my Head”, with a beginning that reminds me of Amorphis, goes back to Van Canto‘s signature style, although slowing things down a bit. Inga Scharf’s voice is, as usual, one of the high points. Her voice is truly beautiful, and she adds something really special to the song. Once again the bands uses a guitar (although briefly) near the end of the song. Whether it’s a good idea for them (a big part of their popularity stems from their lack of guitars) is arguable, but it definitely works for this song.

“Black Wings of Hate” is just amazing. This is, by far, my favorite song in the album. The large majority of the lyrics are sung by Inga, who does a great job, giving a very emotional performance and showing her full potential. I can’t recommend it enough.

“Spelled in Water” slows things down. Although a ballad seems weird within the context of the album (between the Alice Cooper cover and the powerful Neuer Wind, which in turn is followed by the The Higher Flight, a true power metal song) it’s still a great track. Blind Guardian’s Marcus Siepen plays the acoustic guitar in the background, giving the song a more mature sound.

The album closes (at least the normal retail version) with a great cover of Manowar’s “Master of the Wind”. Inga gives a version that has nothing to envy from the original. Her lyrical abilities give a perfect and touching performance that, I’m sure, would make every Manowar fan, as well as the King of Metal themselves, proud.The Bottom Line: Van Canto is more than a bunch of Germans going rakatakatakatakataka. They’re really great musicians and this album proves it. And although it could have been better (I truly dislike the Primo Victoria cover) most of the songs will get stuck in your head for days, and you’ll find yourself listening to them over and over again. Yes, it’s that good.