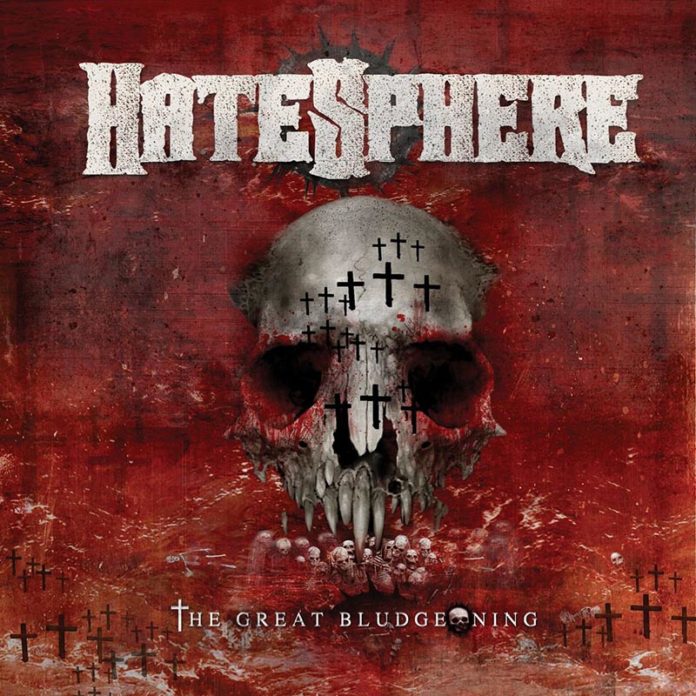 Every genre of metal is associated with some specific theme. Power Metal has its swords, rainbows and moons; black metal its demons and pagan deities; grindcore its blood, feces and body parts; and thrash metal its violence.

So that’s how we get to HateSphere (Denmark) and their new album “The Great Bludgeoningn”. With songs like “Smell of Death”, “The Killer” and “Need to kill” I assume I don’t think to go into details about the underlying theme here.

While “The Killer” is a good album, it’s hard to classify it. Although most of its songs are clearly thrash, others belong more in the territory of melodic death metal (or “pure” death metal). This isn’t necessarily a bad thing, since there are times that you simply need this type of rhythm as background music (thrash metal is my style of choice when I’m pissed off).

The album starts with “The Killer”, a powerful and fast beginning gives way to a solid melodic death metal track. “Venom” starts slower, but quickly speeds up and delivers the first thrash piece of the album, although some occasional growling take it back to the death metal territory. The fast drumming makes you wonder how Mike Park can possibly survive a live set (and also makes it obvious why drums tend to be the center of attention, eclipsing even the guitars). While “Smell of Death” is also a thrash piece, with little variation from “Venom” (and with very repetitive lyrics) “Decayer” is a bit more original, putting some more emphasis on the guitar and a larger dose of growling.   Following “The Wail of my Threnode”, a short instrumental intermezzo, “Resurrect with a Vengeance” takes it up a notch, with a song beginning that seems to go back to a more “classic” death metal style with a slow tempo, only to speed up into a traditional thrash song by the second half.

The title track is truly a masterpiece. This is the kind of song that most melodic death metal bands (I’m looking at you In Flames) wish they had written. A solid and powerful song that reminds you of Iced Earth or early In Flames.

The final two songs don’t disappoint either. “Need to Kill” and “Devil in your Own Hell” are exactly what thrash metal fans are looking for. Believe me, they’ll get their dose.

The final verdict? A good album. Although repetitive at times (thrash metal drums can make it seem like you’re listening to a 70 minute song, as they make it hard to differentiate between different tracks)  and not particularly technical or creative, “The Great Bludgeoning” will not disappoint the fans of Hatesphere, thrash metal or (melodic) death metal.