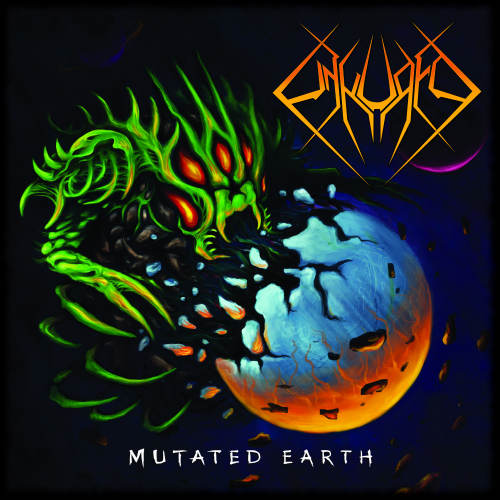 Voivod just be one of the most underrated and overlooked bands in thrash metal; this despite the fact that their unusual sci-fi lyrical themes, the impressive technical abilities and progressive songwriting, and even the stylized band logo, have influenced countless bands. The level of technical ability and highly original song-structuring they brought to the metal arena has literally changed the way many up-and-coming metal bands approach creating music.

One such band is Ohio’s UnKured, who play an intense and technical brand of death/thrash metal with a heavy sci-fi theme and vibe in it. Their latest album, Mutated Earth, is a heavy slab of technical thrash metal with some death metal elements, particularly in the vocal department, which range from deep growls to more high-pitched yells similar to those of Chuck Schuldiner’s. Musically, Mutated Earth occupies a sonic space somewhere between Voivod and the slightly heavier Vektor, with a healthy dose of Human-era Death mixed in. There are plenty of mosh-able moments, like the album opener “Mutated Earth,” which serves as a bit of a sampler for the rest of the album, with its blast-beats, sweep-picked solos, and heavy riffs that alternate between thrash and a really jazzy feel. “Cells” is another great example of UnKured’s ability to switch back and forth from technical to heavy, and even go into odd prog-metal sounding territory; during the song, the guitars occasionally drop the crunchy overdrive to play in a cleaner tone, with a slight reverb. The music effectively gives off an otherworldly vibe at times, and sounds like the kind of thrash album a conquering alien species would blast while invading Earth and subjugating their human prey.

The experimental nature of the songwriting doesn’t always work out too well, however; “A Call From Eternity” is a bit of a mess, with guitars and drums not sounding properly synched up, leaving me wondering if it was done on purpose, or if the producer just did a poor job mixing. For the most part, though, UnKured manage to walk the line between technical and heavy pretty well, and are boosted by a pretty decent production (albeit with that one exception). If you like heavy death/thrash with a bit of a technical side, such as the later works by Death, or you like the sci-fi thrash of bands like Voivod and Vektor, UnKured would make an excellent addition to your collection.