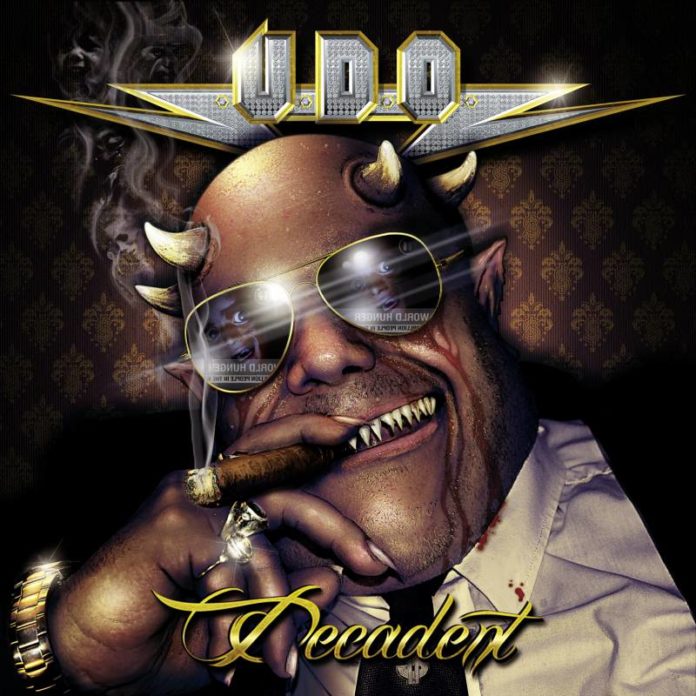 In 2013, Udo Dirkschneider and his unit gave us Steelhammer, a record I held in fairly high regard for its relative diversity and wealth of strong tracks. I felt that it was the strongest entry in to the band’s discography in eight years, and proved that Dirkschneider could still go up against his former contemporaries in Accept. But the overarching problem with U.D.O.‘s catalog is that, while they produce strong works that prove there’s still gas in the tank, they also have a habit of producing middling records that, while doing no explicit damage to their legacy, add nothing substantial to it. Decadent, sadly, falls in to that category.

The overall mediocrity of the record is typified by the fact that the title track was chosen as the lead single. “Decadent” has a verse riff that’s actually pretty catchy and absorbing, but the riff chosen for the chorus, and therefore chosen to anchor the whole song, is just so ordinary it actually ruins the song.

Why the title track was chosen as the lead-off single is beyond me, especially when there are actually a handful of real stompers in here. The second half of the album is populated with great tunes, the best of which is the slow-grooving behemoth “Untouchable”, a track guaranteed to get crowds banging and air guitarists throwing shapes. These songs are actually better than almost anything that was on Steelhammer, and would have made for one hell of a great EP.

While a lot of the songwriting is, as I’ve said, mediocre, the band members are their usual solid selves, pounding it out in that tight, Germanic way that only two bands in metal have ever really perfected. Udo‘s voice is in fine form, especially for a man in his early 60s; his rough and ready but ever soulful rasp is still as sturdy and dependable as a house.

The undeniably weakest point of the album as a whole is that horrible, laughable album cover. There are some pretty fucking stupid album covers in metaldom, but my god if this one doesn’t take the cake as one of the worst. I’m not entirely sure what the greasy character on the cover is supposed to represent, but whatever it is it’s easily the worst caricature of “generic greedy business man of some variety” that I’ve ever had the displeasure of laying my eyes upon. I wouldn’t usually be so hard on an album for its cover, but seriously, whoever chose this thing dropped the ball.

As I’ve made abundantly clear, Decadent does not measure up to its predecessor. The second half of the record is actually fairly magnificent, but the levels of merely average on the first half make for a poor product overall, and that album cover… just no.

The six songs that end the record could have made for a pretty incredible EP. Decadent is an album that proves that, sometimes, more is less.
Good production
All the musicians are in good form
The songs on the second half are all kinds of awesome.
The first half of the record is unbelievably boring
The album cover is one of the worst I've ever laid eyes on.
3