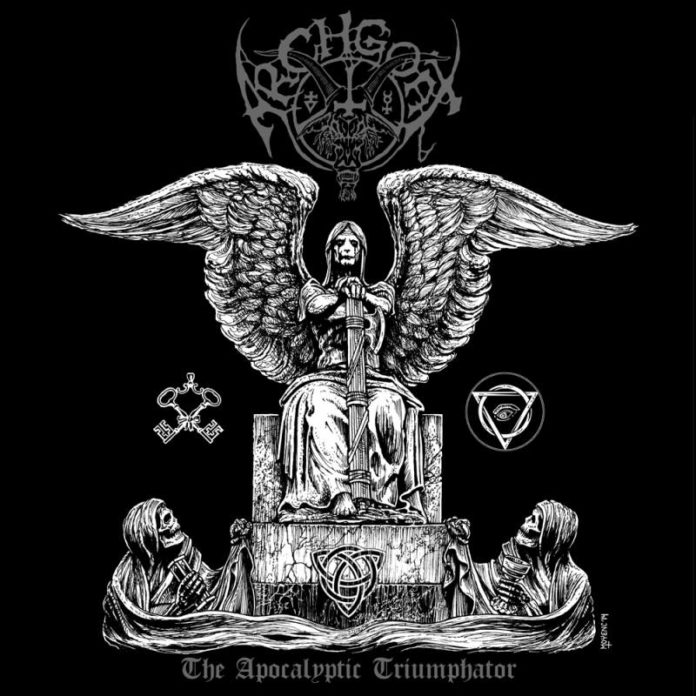 Finland’s Archgoat have earned a reputation as being one of the most uncompromising bands in black metal, a genre that, by its very nature, is already pretty anti-commercial. Formed in 1989, Archgoat only released two demos and one proper EP, reverently titled Angelcunt (Tales of Desecration), before going into exile in 1993, due to not wanting to be part of such a “commercial” black metal scene. Re-emerging in 2004, the band wasted no time in releasing material, producing a handful of Eps and split releases, as well as two full-length records. This second incarnation of Archgoat saw a slight line-up change when Torture Killer guitarist Tuomas Karppinen was recruited as the band’s permanent drummer, taking the stage-name Sinisterror. Although The Apocalyptic Triumphator is Archgoat’s first full-length release in nearly 6 years, fear not, Archgoat still display every ounce of aggression you’ve come to expect from them.

Having grown up on classic metal bands like Judas Priest and Black Sabbath, it’s safe to say I’m a sucker for some good melody; sometimes, however, I really just want an album to kick my teeth in, and The Apocalyptic Triumphator is just what the doctor ordered. Although that’s not to say the album is devoid of melody (“Grand Luciferian Theophany” slows things down with some atmospheric keyboards, which later reappear towards the end of “Those Below (Who Dwell In Hell)”), for the most part Archgoat prefer to play a punishing blend of black metal and death metal, with fast and brutal guitars, deep bass, blasting drums, and guttural death-growls. Having come from the early days of the second-wave of black metal, Archgoat have a somewhat primitive, straight-forward approach to the genre; after listening to “Nuns, Cunts & Darkness,” you have a pretty good idea of what to expect from the rest of the record. As the saying goes, however, if it ain’t broke, don’t fix it, and The Apocalyptic Triumphator is an excellent example of a band sticking to their strengths, and opting for consistency over experimentation. “Phallic Desecrator of Sacred Gates” is a particularly vicious number, having a slightly more mid-tempo pace, but still grinding down any unsuspecting fools that dare stand in the way.

The production on The Apocalyptic Triumphator makes me a really happy camper; the sound is fairly raw, without sounding like everything was recorded in a tin can. All of the instruments are clear and upfront in the mix, but there’s a slight echo, giving the music an ominous and gritty tone. One of my biggest complaints about black metal releases has always been the lack of bass presence, but Archgoat manage to avoid that pitfall, with a solid, heavy low-end that perfectly complements the buzzy guitars. Still, not everything is perfect, and there are moments that are meant to be evil-sounding, but come off as a bit cartoonish; one example that comes to mind are the pig and goat noises on the segue track, “Intro (Right Hand Path).” With pigs squealing, goats bleating, and a whip-cracking, I’m sure the band means to imply that some kind of Satanic ritual is being performed, but I found myself laughing hysterically and rewinding the track to hear it again and again. Also, on “Grand Luciferian Theophany,” mid-way through the song, vocalist Lord Angelslayer begins chanting/growling “Hail Satan, Hail Lucifer,” but, again, the effect that was intended isn’t quite achieved, to humorous results.

The Apocalyptic Triumphator is a pretty solid release, and is a heavy slab of black metal that will have the corpse-painted diehards raising their chalices and throwing the horns. There isn’t a whole lot of change in dynamics, and the songs can seem to blend together after the mid-way point of the album, but I still have to commend Archgoat on doing what they do best. Cheesy theatrics aside, if you like your black metal bruta, raw, and unabashedly old-schoo, I simply can’t recommend this album enough

Black metal veterans delivering the goods
Brutal and uncompromising black metal, excellent mixing, gritty sound gives the album a distinctly old-school vibe
Some truly cheesy moments that are meant to be evil-sounding, not a whole lot of variation in songwriting
4