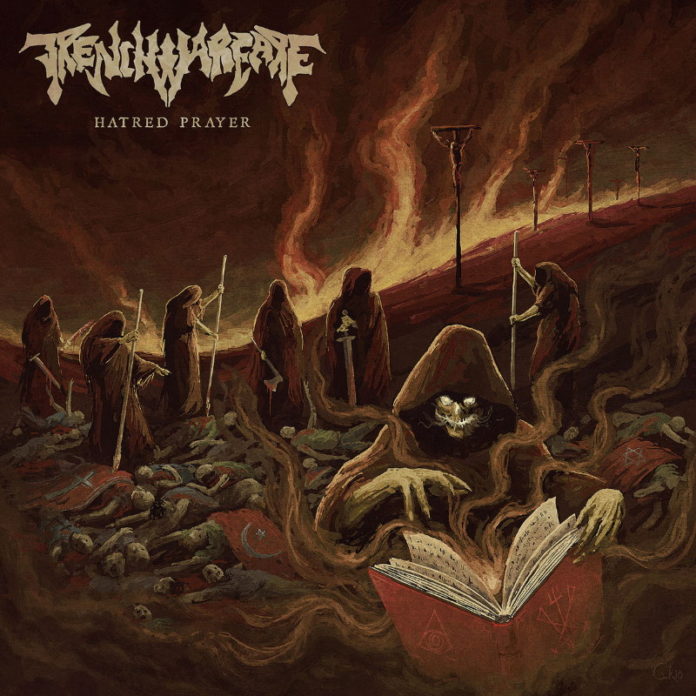 With just over half an hour split between twelve tracks, the Texas-based group of Trench Warfare keep things running fast and hard on their debut LP. Though they seem to sport five members in live shows, the band is trimmed down to a core trio for this album, but the band’s intensity here doesn’t seem like at all diminished.

Popping off the clutch with “Decimate Legions”, an update of one of their demo tracks, the band takes a little time for some Terminator-like mechanized doom noises (also present in the album’s outro) before launching into furious action. Drums, bass, and guitar all move at high velocity while the guttural vocals spew over the din, lending the music a feverishly bestial quality from the outset, one which they maintain with virtually no respite for the remainder of the album. Drums continue to rattle and crash, the guitarist keeps up a white-knuckle rapidity, and the singing stays staunchly dirty.

The band eschews focus on melody, groove, breakdowns, and slam sections, opting instead to make intensity and attitude their prime drivers. Generally speaking, it works, but the few exceptions, like the slow pressure of “Astral Projection”, make the resistance to depth all the more striking. At the same time, for a first album, the ability to carry off the persistent manic grind without exhausting themselves or their tricks is remarkable, the four years between demo and album notwithstanding. Also worth noting is that those older tracks slot in alongside the newer material without a hitch, so props to the band for being able to maintain that sort of continuity.

Even operating in much the same arrangement from track to track (blistering speeds, rampaging guitar, blasting drums, and singing in hard grunts), the band flexes the style enough to ward off staleness until the end. From little touches like playing with panning at the start of “Behead Muhammad” to throwing rhythmic break-ups into the streaming onslaught, the band shows that while they’re adhering to a rather strict core formula, some tweaking of that formula is acceptable. Personally speaking, getting to hear them change up tempos, as with “New Lord” and the aforementioned “Astral Projection”, makes the rush of high-speed beating hit much harder than when it runs at that speed for four tracks straight. Hopefully future releases will see them expanding their experimentation, but as they establish their identity with this one, it’s an understandable narrowing of their focus.

Whether intentional or not, the band seems to back-load the less dogmatic material, which helps fight some of the fatigue that the uniformity of the earlier stuff can produce. Special shout-out in that regard to the drum-work cleverness of penultimate track “Sate Thy Lust”, which gives things a more engagingly unpredictable bounce underneath the rasping chords. Though it regularly suggests that the band’s best material is yet to come, if you’re looking for death metal with some persistent and believable brutality, this album will certainly do the trick.

THE BOTTOM LINE
The band seem to know how far they can push their style to fill an album, and they've done so here with respectable form and strong power.
Reader Rating1 Vote
POSITIVES
High intensity that doesn't let up
Strong supporting arrangements between the instruments
Genuine-seeming anger
NEGATIVES
Gets a bit samey after half a dozen tracks, particularly in regard to the guitar tone
No real stand-out tracks due to the similarity of them all
4