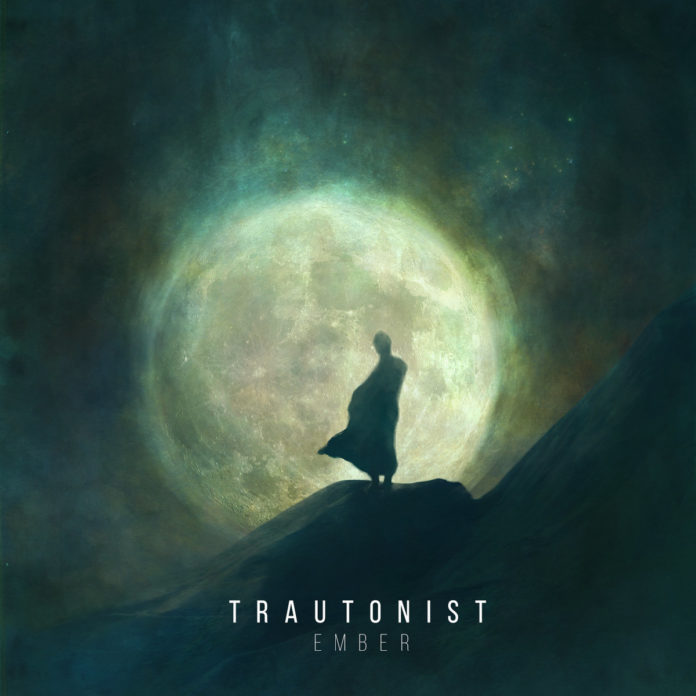 Following up on their 2016 self-titled debut album, the German two-piece of Trautonist deliver the simply-titled Ember, with seven tracks of post-black-metal (including one titled “Woody Allen”, to really nail down that sense of human anguish).  Opening on a sharp note with the bleary tones of “Fire and Ember”, the duo quickly establishes their MO of guitar-tone blankets, meshed-in percussion, and hazy vocals.  A more evocative descriptor (and a handy one, if the PBM descriptor is having trouble catching in your mind) would probably be blackened shoegaze (‘blackgaze’?), since the music doesn’t really bother with the departure from traditional rock/metal song structuring that the post- prefix originally implied.

Instead, it seems to be a ticket to bypass the harsh jaggedness of standard black metal, with the edges swaddled in so much fuzz that its more like getting a back massage with a rubber morningstar than being impaled on a bloody kvlt sword.  If that simile’s too far out there, do a quick mental comparison of Opeth‘s output before and after Ghost Reveries to land yourself an (extremely rough) approximation of the territory.  Or grab some Bright Eyes and Mogwai albums and play them over each other while occasionally screaming to yourself, whatever floats your boat.

Tunes like “The Garden”, which could almost be mistaken for a cut track from A Place To Bury Strangers, and which show the duo seemingly much more engaged in their playing than when they glue on the metal spikes, feel like a view into where their real inclinations lie.  This is not to say that they’re not going for that fusion with respectable effort, but for all the howls and gnashing, the broad majority of the album’s high-points come only when they drop those theatrics to focus on traditional shoegaze song-writing.  I’m hardly one to discourage stylistic cocktailing in music, but in this case it feels like the band is just getting in their own way with the efforts to stand apart by way of a weird combo.

Could they make it as a straight shoegaze group?  Sure, but the relative dying-down of a customer base for that since the early ’00s, along with NPR stories about ‘accessible black metal’ like Deafheaven means that there’s just more profit, both financial and interest-wise, to be made by tagging on some quirks to the formula.  It’s kind of a shame that the market has had that chilling effect, both for fans who want their shoegaze without any style modifiers, and for the bands who need to staple them on in order for labels to take a chance picking them up for distribution.  Then again, maybe I’ve got this completely misinterpreted, and Trautonist have an unshakable devotion to the further pioneering of post-black-metal without being tied to the usual associations of ‘post-,’ ‘black metal,’ or even just ‘metal’ as far as establishing what their music sounds like.  In that case, good on them for shaking free of nominal determinism. Maybe we’ll get some post-grunge thrashcore that sounds like John Tesh in the near future as well.

Getting bogged down in the whole ‘do they sound like what this genre tag suggests?’ is a mostly pointless game for music nerds, irrelevant next to ‘is this music enjoyable, or stimulating, or creative?’.  And, happily, there’s a yes for all three parts of that latter question.  Trautonist hit some good grooves, the tonality and production land some interesting and spiky points, and (definitional debate aside) the blending of styles has some undeniable creativity guiding it.  It may leave some listeners lured in expecting deliberate deconstruction of black metal’s foundational principles cold, but hopefully others will find something to enjoy in it that they never expected and, by that metric, this group will have succeeded in making music for people.  Still, I can’t help but hope that they figure their own musical desires out a bit more concretely by the time their next album rolls into existence.

Go into it expecting a shoegaze album with more harshness than usual, and you're likely to be pleasantly surprised.  Go into it with your corpse-paint on, and feel awkward about your expectations being steadily deflated over the course of the LP.
Reader Rating0 Votes
Good production work, fluid use of guitar, easy merging and transitioning between the two vocalists, and refreshing freedom from genre dogmatism
Something of a sheep in wolf's clothing, with much more gentility than the artwork or track titles suggest, and the merging of styles feels more than slightly forced at times.
4