Torn The Fuck Apart – …The Dissection Of Christ

Every once in a while I will be contacted by a band that would like for us to review their material.  Most of the time I will usually oblige them by either having myself or one of our other talented staff members write about the music.  In this particular instance I was talking to fellow-staffer Ben Chipman and mentioned that the death metal band Torn The Fuck Apart had sent me their brand new album, “…The Dissection of Christ“.  Ben lets me know that this is actually one of the local acts in Kansas City that he has seen a few times and was rather excited to hear some local flavor getting a little buzz around here.  This was also in the same conversation where we discussed how awful this years Golden Gods Awards winners are.  Those award recipients had greatly angered me, and I figured it was time to cleanse my palate by giving the Torn The Fuck Apart a spin to brighten my spirits.

For a death metal aficionado such as myself, it is absolutely imperative that the first track of an album comes out incredibly strong.  I want the band to dig their meathooks into my flesh and make me beg for more auditory carnage.  Unfortunately, “…The Dissection of Christ” does not do this.   The opening track ‘God’s Blood Turns Black’ can only be described as Origin Lite that features a sample of the blowhard known as Bill Maher, but it lacks everything that the aforementioned group does right.  “Okay,” I thought to myself, “it’s only the first of ten songs.  There is a lot of time left for this to get better, right?”

I can appreciate what Torn The Fuck Apart had set out to accomplish with “…The Dissection of Christ“, but I can also tell when there is a complete lack of identity in the music.  Because of this identity crisis the Origin (particularly “Informis Infinitas Inhumanitas“) worship never ends.  If you just listen to the beginning of ‘Father of Filth’ then you will only be able to think of ‘Amoeba’ from “Echoes Of Decimation“.  Normally this would not annoy me as much as it has, but Torn The Fuck Apart are not able to showcase what Origin does so well.  Even if they could, Origin already does it much better.  Origin.

The rest of “…The Dissection of Christ” veers off into generic Krisiun-styled tech-death or groove-infused chugging with a smattering of breakdowns every once in a while.  Now, I have already mentioned that Torn The Fuck Apart do not do technical song-writing very well, but they do it in a manner in which I loathe the second most (triggered drums are the first) in modern death metal.  Musicians who read this article far and wide, please heed my advice:  Repeated fretboard scaling is not the same as song-writing.  End of story.  What makes this even worse is when combined with the paper thin guitar tone.  With each pluck of a high note, the right side of my face would contort and twitch, making me think (wish?) I was about to have a stroke.

I also got the feeling that the band was unaware of how to use bass drops since they would toss them with reckless abandon into any song they figured needed it, but none of them were necessary.  Did I forget to mention the blatant abuse of samples from television shows, documentaries, and movies?  I hope I didn’t, because if you are Will Rahmer (Mortician) then you will love them.  While I was very happy that “…The Dissection of Christ” was almost over, there was just one more moment where I needed to violently slam my face onto my keyboard.  It was just past the half-way mark of the final track, ‘Angels Decayed in Dust’, where I thought Cradle of Filth had somehow been vomited into the music with a synth keyboard tone that would make even The Crypt-Keeper roll over in his grave.  I know that with this being the last song the band wants to go out on a high and epic note, but all it did was cause me to burst out laughing.  This is not a way you want anybody to remember your albums ending.

After spending all this time pointing out the faults of “…The Dissection of Christ“, there were a few things Torn The Fuck Apart had done right.  My favorite track had to be ‘Pergatorium’ because it was a nice melodic change to the endless drivel that was thrust upon me.  It was only a minute long, but that minute was a saving grace to what could have just been me deleting the album and saying “whoops, my hard drive crashed.”  They did the same type of melodic interludes in both ‘Dead Religion’ and ‘Our Serpent Savior’, and while those tracks are nothing stellar than what I had previously described, it was still nice to see them experiment a little bit.

The only other praise I can give to the band is the production of the drummer and bassist.  Their instruments sounded good despite what was actually played by them and helped out the severely weakened guitar and one-dimensional vocals.  I already talked about the guitar, but the vocals were a major factor in why I do not like this album.  They were done in a fashion that would make Glen Benton of Deicide sound like he still has his vocal abilities from “Legion“.  The majority of the vocal cadences were just single breaths per lyric, making them far too drawn out and resulting in one of the dullest death metal performances I can remember.  Seriously, why are the vocals or guitar tone this bad?  I’ve seen Bert and Ernie get heavier on Sesame Street.

I never like to be this antagonistic when it comes to reviewing albums, but I have to in this case so Torn The Fuck Apart realize what not to do in the future.  “…The Dissection of Christ” is the type of album that you would have your girlfriend listen to and get her thoughts on it, and because she loves you (or doesn’t want your full can of PBR smashed against her forehead), she would give you a warm smile and say that you guys will be “the next big thing to come out of Kansas City”.  It’s just too bad she is giving you false hope when she knows as much about death metal as I do about crocheting.  Really, you may just want to skip this one and watch this video for 33 minutes instead. 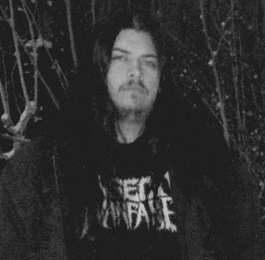 Jon
Having grown up in the vast industrial wasteland known as Detroit, my sister subjected me to multiple albums by bands such as Judas Priest, Iron Maiden, and Exodus, I quickly became immersed in the world of heavy metal for life. Even with my love of the tradition styles of metal, I always found myself craving something louder and heavier, thus bringing me to the much more extreme side of this genre of music. With classic bands such as Dismember, Autopsy, and Napalm Death always dominating my stereo system, I felt content to dig as deep as possible into the depths of ghastly heavy metal, and all these years later I still haven’t hit the bottom.
Previous articleStruck By Lightning – True Predation
Next articleLionheart – Undisputed