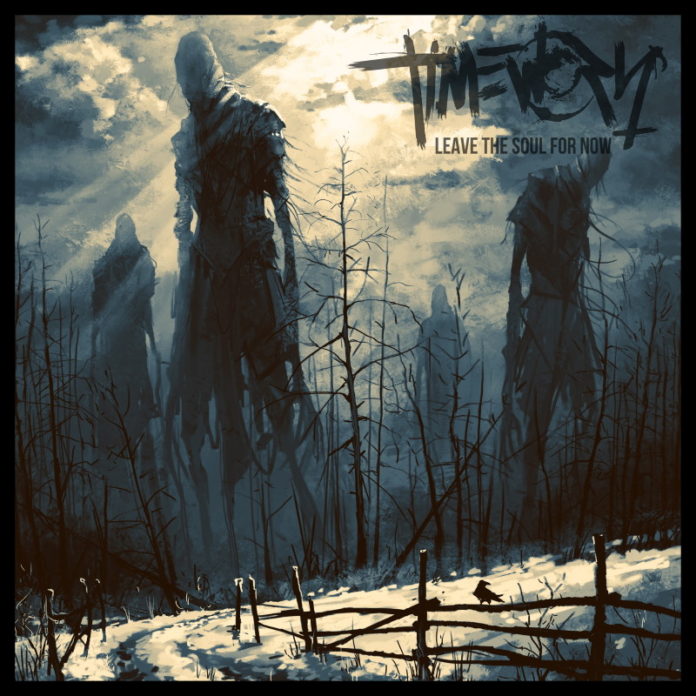 On their third studio album, the Norwegian five-piece of Timeworn deliver a mix of hardcore and post-metal; hardcore with the vocal route of yelling, post-metal evidenced in the guitar tone and willingness to adapt rock structures to metal presentation. The vocals fuse both styles into the growling rasp used in much of the album, which helps obscure the often under-powered (and sometimes simply puzzling) lyrical content. While the album manages to project an air of competence with respectable consistency, close listening pulls a number of flaws to the surface. It’s a bit of a shame, because while it’s far from a masterpiece, there’s enough effort and earnest energy to give the band some underdog pull.

There are times, as in the bridge transitions of “Count the Crosses”, when the band strikes on a feel of something expansive, but most of the time they opt for an in-your-face immediacy to their attitude and arrangements (“Hellwater” being the major mellow-toned exception, though it did bring Nickelback and Staind to mind). While that does work to keep up a sense of energy and momentum, I’m having a hard time imagining that it will hold up that well years from now. For the album to achieve that sort of persistence, there’s going to be a lot of pressure on the more thoughtful sections of the songwriting (comparatively few and far between) and the hooks (usually not that penetrative).

But then again, there are times which find the band throwing off all that baggage and swerving into impressive success. For example, the instrumental break-down of “Oblivion Seekers”, which rips right into a barreling metal punch-up, or the layered vocals over broad-toned guitar plugging in “Paradise Crown”, which feels like the faintest of flirts with symphonic metal. With the album clocking in at just under an hour across its eight songs, those light-up moments are nowhere near enough to carry the whole thing, but they do serve to throw the occasional surprise up and disrupt the eventual doldrums of the music.

On a more positive note, the album has a great production. The instruments are mixed with an ear towards keeping them distinct and mostly discrete, but with tonal interaction for crescendos and other outbursts. Frankly, it’s probably the most impressive aspect of the album, outside of the occasional songwriting surprises (I also dig the cover art).

I have to say, I feel a little bad coming down on the album as hard as I am, because Timeworn are certainly not half-assing anything here. They’re trying out some new things, delivering pretty solid riffs, changing up their instrumental support dynamics from song to song (even if those changes aren’t usually too drastic), and the drummer is busting his ass to bring the heat. If I had to point to one thing as bringing it all down, I’d probably blame the friendliness of the music. It feels like they’re trying to find a happy medium between approachability and metal attitude, and the quantity of bands who’ve tried that and consequently sunk out of sight is innumerable. Hypothetical though it might be, I feel like they’d have much more success if they threw themselves more fully into either side of that mix.

Timeworn – Leave the Soul for Now
THE BOTTOM LINE
A confused but occasionally inspired effort, with most of its success attributable to sheer energetic force
Reader Rating1 Vote
POSITIVES
Deft guitar-work
Satisfying rhythms
Good energy
Fun riffs
Respectable experimentation
NEGATIVES
The lyrics come off as lacking most of the time
The occasional borrowings from melodeath feel ill-fitting
The stylistic mixing ends up feeling like more of a compromise than a fusion
3.5