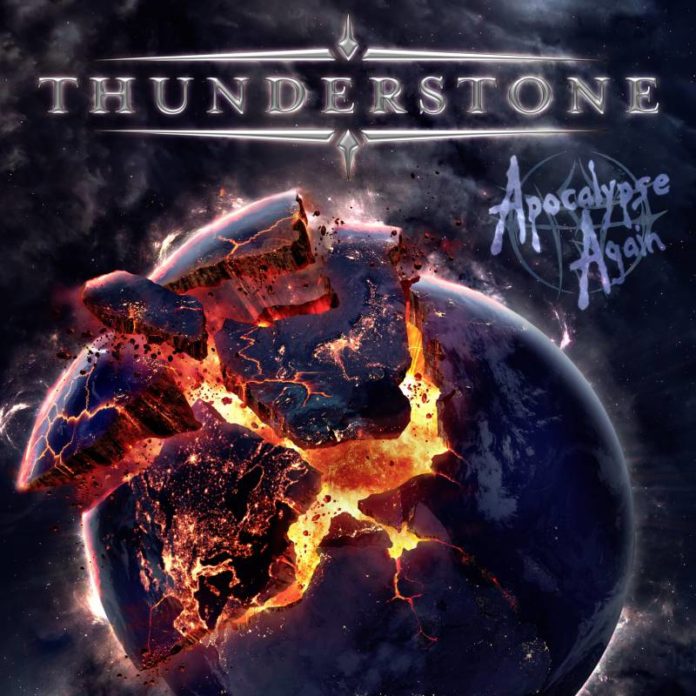 Power metal seems to be a genre tailor-made for rocking huge stadiums packed with thousands of screaming fans. Whether it’s the use of keyboards, sing-a-long choruses, soaring vocals, or guitars that draw from speed metal or NWOBHM bands of the 70s and 80s, power metal has a sound that is truly larger than life. Lyrics tend to run the gamut of traditional metal tropes, ranging from dragons, war, Lord of The Rings, or in the case of Finland’s Thunderstone, the apocalypse.

For those following Thunderstone’s career since their formation in 2000, the latest effort, Apocalypse Again heralds the welcome return of original vocalist Pasi Rantanen. Present for much of the band’s catalogue, Pasi departed in 2007, leaving a big void in Thunderstone’s sound. Apocalypse Again, thankfully, picks right up where Pasi and company left off nearly a decade ago. There are speedy numbers, such as “Wounds” and “Walk Away Free,” showing guitarist Nino Laurenne’s roots in the Finnish thrash/speed metal scene. Where the band really shines, though are more mid-paced songs, with “Through The Pain” being a great example. Heavy, groove-oriented riffs couple with melodic keyboards and Pasi’s powerful vocals to make a truly sublime, arena-approved heavy metal masterpiece. You could almost see all the lighters (or iPhones with pictures of lighters, since this is 2016) going up in the crowd.

The pacing works extremely well on Apocalypse Again, with a good mix of fast tunes, some that are more mid-paced, and ballads creating a very natural sounding ebb and flow. “Higher,” for instance, builds up the intensity, starting with some flashy (but relatively slow) guitar work that sounds like it belongs on a Stratovarius or Sonata Arctica record. Midway through the song, Pasi hits an ear-piercing note that will have Rob Halford fans turning their heads. By the time the song is done, the listener is primed for something a bit faster; enter “Wounds,” which starts off with a very Judas Priest-sounding guitar fade-in. The opening three tracks also have a natural flow, with “Veterans Of The Apocalypse” ramming through the gates at a speed-demon pace, followed by “The Path,” which brings it down a notch, before giving way to “Fire And Ice,” a pretty solid power-ballad.

The production on this record is everything you’d expect from a modern power metal album; vocals get the biggest boost, with keyboards and drums a close second. The guitars and bass are slightly heavier than your average band, though, which again points back to Nino’s time in a thrash band. There are some truly heavy riffs, but Thunderstone sound like the kind of band that you’d expect to see every member onstage smiling. In other words, even with heavy riffs, dark artwork, and lyrics about the end of time, Thunderstone come across as really damn happy-sounding. There’s a lot to like on this album, but I can’t help but think these songs would be better suited in a live setting. They have a somewhat formulaic quality to them, and a catchiness that almost demands crowd participation on the choruses. Still, the fact that you want to sing along, even in the comfort of your own home speaks volumes about the band’s songwriting abilities, particularly their ability to write material an entire stadium of people could relate to. If you like traditional power metal in the vein of Stratovarius or Sonata Arctica, give Thunderstone’s Apocalypse Again a whirl.

IN A NUTSHELL
Pasi Rantanen makes a welcome return to Thunderstone, with some solid, stadium-worthy tunes
POSITIVES
Strong vocal performance
The songs flow well together
Heavy guitar and bass in the mix
Very catchy
NEGATIVES
A tad formulaic
The songs are better suited for a live concert than a listening session at home
4