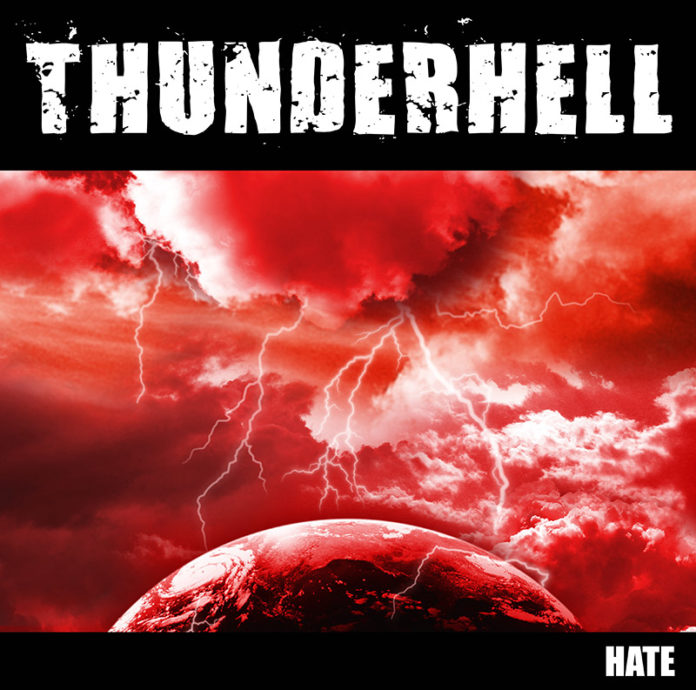 Have you ever seen a “B” action movie where the hero is tracking down his girlfriend that a bunch of anarcho-communist-hippie-punks kidnapped, and he makes his way into a seedy pool hall/bar in a back alley?  He would kick in the door and everything would stop in the bar to look at him.  The hero looks around menacingly, says something tough and the punks begin to make their way towards him, and he grabs one of their faces and smashes it into a jukebox, which then miraculously starts playing a generic thrash song and everyone starts fighting?  I believe this is what Thunderhell thought to themselves when they wrote and recorded the four tracks on “Hate“.

It is heavily inspired by the more radio-friendly generations of Metallica, with the vocalist/bassist trying his hardest to sound like James Hetfield, and the drummer trying his best to upstage Lars Ulrich (which really isn’t that difficult).  Everything about this album is absolutely non-threatening, and straddles the line between groovy thrash metal and hard rock.  It’s just the generic hate-filled music we would expect to hear if we traveled back into the mid-1990s when people were first starting to take notice of Pantera.  The reason I say this is because everything sounds just like a mash-up of old Metallica and Pantera b-sides.  This should be a major problem, but you know what?  This album is ridiculously fun, even if it is more generic than the next Justin Bieber radio hit.  I don’t know why this has such charm to it, but “Hate” is when people stop taking heavy metal so seriously and just think, “to hell with it, let’s jam!  Cowabunga!”  I’m looking forward to hearing Thunderhell‘s next release once a new string of Chuck Norris movies come out.