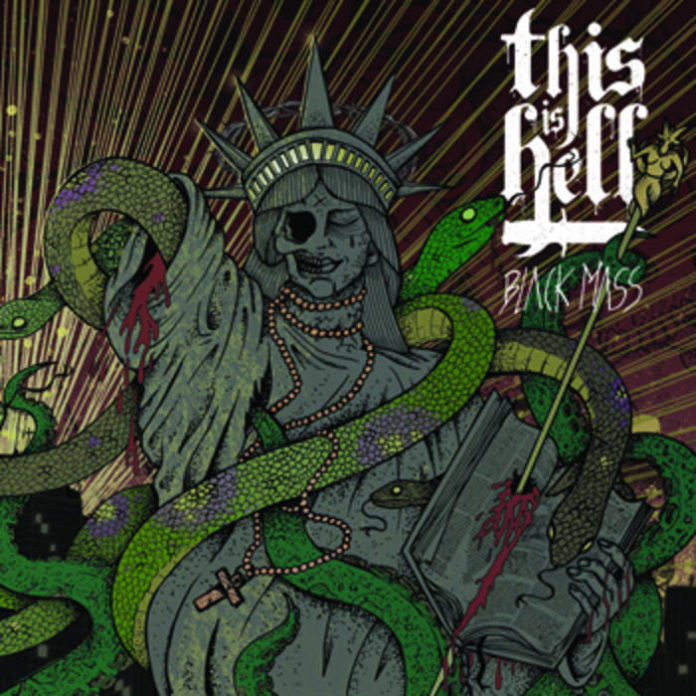 Perhaps the best thing about This Is Hell is that they’ve always been fairly straightforward in the type of music they like to play. In an age where many bands find themselves second guessing themselves or changing things up (often to disastrous results, look no further than Morbid Angel‘s last album which sounded like music that was rejected from Quake 3 Arena) it’s nice to see a band not only stick to their roots; but continue to naturally grow and progress. Long Island, New York natives This Is Hell have continually gotten better with each album they’ve put out, and Black Mass continues the trend without missing a step.

The music itself is mostly a blend of thrash and hardcore elements; if you’re familiar with the band Cancer Bats, think of them under the same umbrella. In reality, This Is Hell winds up being more on the thrasher side of things, and it winds up working remarkably well for them. Tracks like album opener “Acid Rain” and “Black History” offer incredibly catchy riffs with lyrics that make it easy to shout along and actually have some fun while listening. Vocalist Travis Reilly does a remarkably job of sustaining the same vocal range pretty much the whole album without grating on your nerves, a problem that, say, Hatebreed has at times. The album itself flows fairly well and for the most part, it’s over before you know it. They’re are a few hangups in the middle where things start to sound a little samey, but tracks like “Mi Nombre” come along and start pushing the pace again.

Instrumentation wise, as I said before the guitars offer plenty of fast catchy riffs that always catch your attention. The way This Is Hell varies things up is rather nice also; I don’t think I felt like I heard the same riff more than once during multiple listens (or if I did, I just didn’t care since it was rather good). As far as drums go – they’re good, but I personally think they’re buried a little in the mix. At times they seem to blend in with the rest of the song, and during the few instances where they’re meant to stick out front and center (like the little fill near the end of “Salt The Earth”) they sound muddy and distant. Not the end of the world though, and most of the time they sound really good.

Black Mass does a good job of drawing you in right from the opening song and never really letting you go. At no point during the album did I feel like I was losing interest, which is a great thing considering that often times I find myself wanting just a little more from “thrash but not really thrash, hardcore but not really hardcore who the fuck knows what they are” bands. In reality a good band doesn’t really need labels like those, they should just make good music. This is what This Is Hell has done on Black Mass. Personally, I started the album up again right after the last song ended; and that’s a pretty good sign to me. If This Is Hell keeps up the steady rise in the quality of their albums, I feel like they have a legitimate chance to get big. The music is accessible enough to where you could stick it in something like the next Madden game (remember, Madden played a big role in the early success of Avenged Sevenfold) and not immediately scare people away, but still hard enough to where you wouldn’t be embarrassed to play it in front of your friends wearing Goatwhore and Misery Signals t shirts. More bands like this are always welcome in the Metal world.