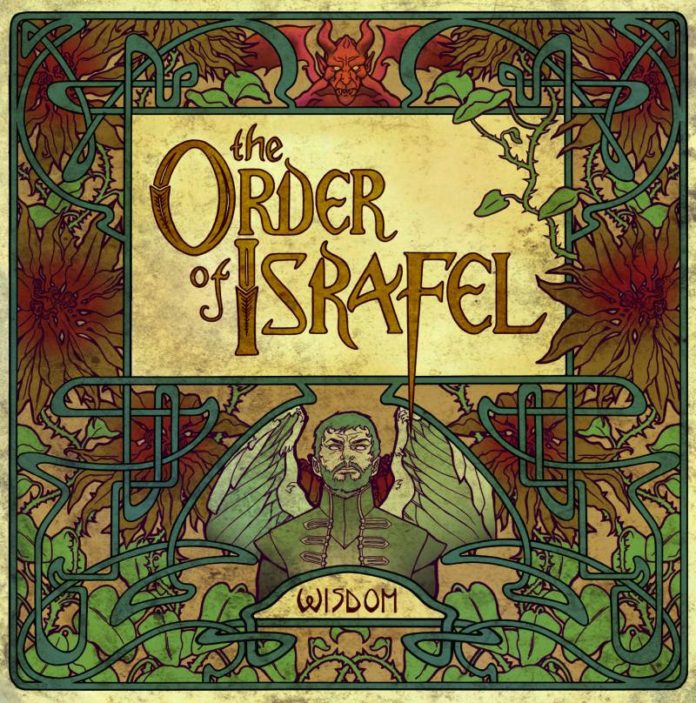 My ears always perk up when I hear about a new doom metal band coming out of Sweden; the track record has been pretty good so far, with bands like Candlemass and Count Raven paving the way for younger bands like Grand Magus. While often taking the heavily Black Sabbath influenced slow approach, the Swedish bands have never really been content with sticking to one sound, and have incorporated elements of Viking, Pagan/Folk, NWOBHM, and classic hard rock.

The Order Of Israfel are a new doom outfit from Gothenburg, Sweden, that play a traditional form of doom metal, with Wisdom being their first official release. While there are plenty of Tony Iommi-esque riffs throughout Wisdom (the title track is an excellent example), there are a lot of other influences that stick out as well. “The Earth Will Deliver What Heaven Desires,” for example, starts off with several layers of acoustic guitar and tribal-styled percussion, and multi-layered vocals that sound like an invocation to Odin himself. About mid-way through the song, though, the band jumps back into heavy metal mode, continuing with the same melody, this time with crushing guitars that gallop in a way that’s similar to the more mid-paced tunes by Amon Amarth. The guitar-work throughout is truly breathtaking, just listen to the solos on “Promises Made To Earth”; the riffs are huge, heavy, and yet there’s still an air of melancholy in them, and the lead guitars soar to the very halls of Valhalla.

There are a lot of changes in direction from song to song, going from the slower doom numbers to more up-beat tunes like “On Black Wings, A Demon,” which takes the listener on a beer-swigging romp through the NWOBHM’s hey-day. The faster songs remind me of Grand Magus’ newer material, though a bit more down-tuned, giving The Order Of Israfel a slightly heavier sound. Vocally, I have to admit, Tom Sutton’s vocals took some getting used to; they aren’t super powerful, and aren’t always the most tuneful, but I didn’t like Lee Dorian from Cathedral’s vocals at first either. Trust me, after the second or third listen through the album, the vocals will click for you too; there’s a certain charm to Tom’s approach, and you get the feeling he’s being a little tongue in cheek with it. In fact, there’s a little bit of humor sprinkled throughout Wisdom, like the high-pitched “yeah” screamed right at the end of “On Black Wings, A Demon,” which is as hilarious as it is unexpected. “The Order” is a bit of a “fun” track, with a bit of a punk rock feeling to it, where the band sings “We are The Order Of Israfel” over and over; this is another moment in the album that I had to hear a few times before I “got it.” Normally I hate when a band calls out their own name in a song; just don’t do it unless you’re a hip-hop act, however this instance gets a free pass, since I believe it was done in the name of fun.

In order for an album of this nature to work, you have to have the very best production you can possibly get, and thankfully Wisdom sounds magnificent. The tone and sound quality here is comparable to what you would hear on the newer albums by Candlemass; everything is absolutely massive, the guitars and bass are super heavy, the drums are pounding, and the vocals are layered to perfection. I love how the duel vocals are handled, particularly at the beginning of “Promises Made To The Earth”; the harmonies really shine through and give the song an extra layer of melody.

The Order Of Israfel show a lot of promise with Wisdom, which is an excellent debut and has set the bar high for any subsequent releases. As I said earlier, you may have to listen to the album a couple of times before you can form your own opinions on it; just as there are many styles and approaches to heavy metal presented here, there are many layers that won’t be immediately apparent on your first listen. Fans of Candlemass, Cathedral, and Count Raven will certainly enjoy Wisdom, and I’d suggest picking up a copy today.

An excellent debut for a promising young Swedish band. You'll need to listen more than once, but you'll be surprised how much it grows on you.
Excellent blend of traditional doom, heavy metal, folk, viking, and top notch production
Doesn't click immediately, you'll want to listen to it a few times before forming an opinion
4.5

Burn the Army – The Tide to Sink the Summit