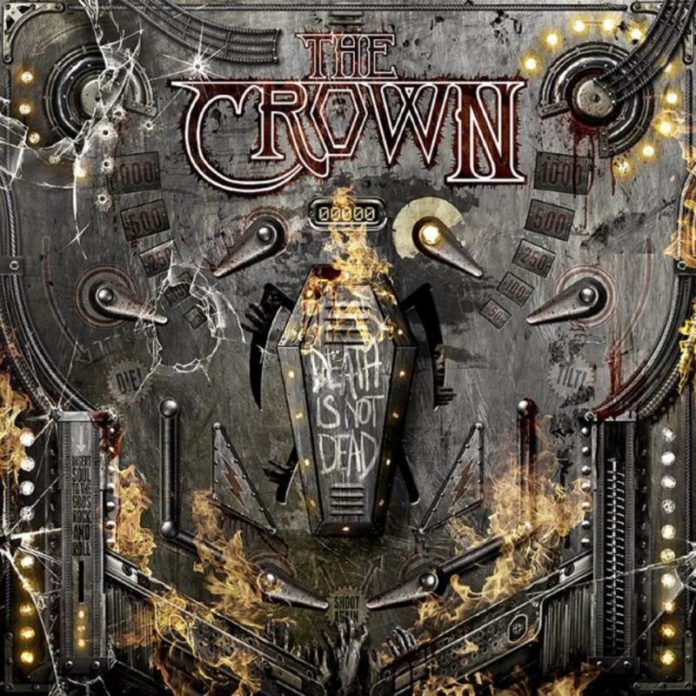 If you’ve kept up with my often childish gibbers on this site, you’ll probably have noticed that I love all things Swedish when it comes to metal. Whether it’s the over-the-top power metal of Sabaton, the raw black metal of Marduk, or the classic death metal of Grave, I love it all. One genre, though, that I feel is way overlooked when it comes to all things Swedish is thrash; with one foot in the death metal camp, and the other in a similar sonic territory to that of the German thrash scene, I think it’s time Swedish bands get their recognition. Darkane, Hypocrisy, Defleshed, and Carnal Forge have all carried the thrash torch proudly, and have created some of the catchiest and most technically brilliant records of the entire thrash genre. One such band that has helped shape that scene is Trollhättan’s The Crown. Initially known as Crown Of Thorns, they played a punishing form of thrash that was sonically similar to the likes of Possessed and early Sepultura.

2015 sees The Crown releasing their first record since 2010’s Doomsday King, with the aptly named Death Is Not Dead. Although the thrash is still there, Death Is Not Dead has many more mid-paced moments than previous efforts, particularly on tracks like “Eternal” and “Horrid Ways,” yet none of the music loses its heaviness or primal potency. That being said, I find myself preferring the speedier moments, as in “Iblis Bane”, which flirts with the melody from the classic Orff‘s “O Fortuna.” That piece of music has been used and re-used in many different settings, and could easily come off as cheesy and contrived in less capable hands, but The Crown manage to weave it seamlessly into an excellent melodic death/thrash tune. The riffs on Death Is Not Dead are super chunky, even when they’re being played at blinding speed, and will certainly please thrash and death fans equally; check out the fast and furious track “Struck By Lightning” to see what I’m talking about.

Melody is a huge part of the sound on this record, but I hesitate to call it a pure melo-death album. This isn’t to say that there aren’t similarities, but The Crown certainly still show a more thrash-oriented style than the Gothenburg bands. The guitars are super flashy, the bass gives the music a solid low-end, the drums pummel the listener into submission, and vocalist Johan Lindstrand sounds absolutely vicious. The production is super clear and modern sounding, with each instrument given equal footing. With all of the modern technology available, it’s really easy to over-produce things, throw in too many layers and make the final product a little too slick; fortunately, Death Is Not Dead doesn’t fall into that category, sounding pretty organic and losing none of its brutality.

If you like your thrash a little heavier, or if you like your death metal a little speedier, The Crown are your go-to band, with loads of melody, bone-crushing heaviness, and extreme technical prowess. Long-time fans might get a little turned off by the mid-tempo portions, but I found the slower-paced tunes to be just as powerful as the all-out thrash-fests. Death Is Not Dead is an excellent addition to The Crown’s discography, and shows a band that is still in their prime.

Long time Swedish thrashers manage to sound just as vital as the day they started.
Impressively technical, brutal and strong melodies
Excellent production
Mid-paced songs might turn off fans looking for an all out speed-fest
4.5