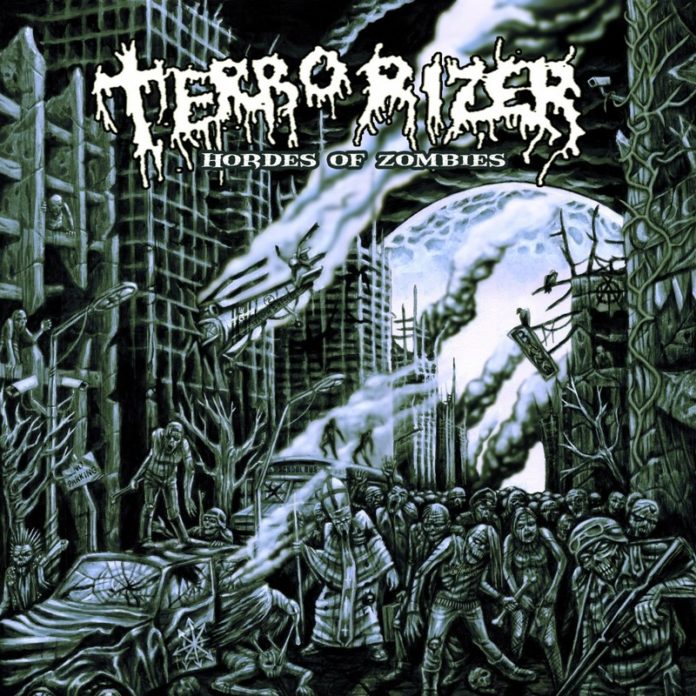 Terrorizer were once known as the premier death metal/grindcore group in the United States (even though had already broken up) after they had posthumously released the legendary LP “World Downfall” in 1989.  Little did they know that album would influence death metal and grindcore for decades to come.  Then in 2005, Pete and Jesse decided to give Terrorizer another shot, and they released their comeback album “Darker Days Ahead” in 2006.  There was a lot of criticism of that album since it wasn’t anything close to “World Downfall,” but not only that, it was just very flat and boring death metal/grindcore, and that’s putting it nicely.  Unfortunately, Jesse Pintado had succumbed to his fight with diabetes in 2006, and Terrorizer bit the dust again.  But, the corpse of Terrorizer rises once more, this time with Pete being the sole survivor of the band.  Anthony Rezhawk has come back to perform his vocal duties, and Pete employed David Vincent to come back on bass and got Katina Culture to be the replacement for the now deceased Jesse Pintado.  Now with a full line-up again, Terrorizer tries to restore its legacy with a new offering, “Hordes Of Zombies.”  After two reformations, does Pete “Commando” Sandoval and Co. have what it takes to win back the hearts of disenfranchised fans?

After an ambient introduction that wastes almost two minutes of your time, you are dumped straight into the title-track, ‘Hordes Of Zombies.’  You can immediately tell that Terrorizer tried to conjure a more straight-forward style that harkens back to “World Downfall” rather than “Darker Days Ahead.”  So far everything just feels tighter than it was on “Darker Days Ahead.”  And faster.  Much faster.

Katina Culture shows herself to be a worthy successor to that of Jesse Pintado’s signature Terrorizer sound.  A lot of her riffs, while fast and sometimes spastic, feel very vicious and well-structured (particularly on ‘Ignorance And Apathy’).  She definitely has some chops, and with this being my first introduction to her (even though she is also a part of the punk rock group Resistant Culture) I am thoroughly happy with the performance she has been dolling out.  There’s even a good bit of Mitch Harris (Napalm Death) influence that can be heard in some of the later songs, such as ‘Malevolent Ghosts,’ ‘Flesh To Dust,’ and ‘State Of Mind,’ just to name a few.  Pete “Commando” Sandoval’s drumming is, well, Pete “Commando” Sandoval.  I don’t know how to put it anymore than that, especially on a Terrorizer record.  He has the mid-paced drum beats, and then there’s the full-speed ahead double bass and blastbeat-oriented grindcore that we love, with maybe an drum break interlude every once in a while.

One of the main problems with “Darker Days Ahead” was that Anthony Rezhawk’s vocals were atrociously loud in the mix, and with the lack of range he has it made his vocals ridiculously one-dimensional.  While he still retains the same style on “Hordes Of Zombies,” he is integrated much more evenly with the music, and makes his presence to be not great, but much better than what the hell went on with their last album.  Unfortunately for him, the vocals are still pretty one-dimensional with the same vocal cadences being used repeatedly, but let’s face it, Terrorizer has always been strictly looked at as a guitar-and-drum driven band.  They could have made this album completely instrumental and I really don’t think the dynamic would have changed that much, and I think the same goes for David Vincent.  You can hear little bits of the mid-and-high ranges of his bass, but again, “Hordes Of Zombies” seems to be a showcase for Pete and Katina to show their stuff, with Anthony and David just merely being brought along for the ride.

Even though there are only those two speeds to Terrorizer, some of the songs on “Hordes Of Zombies” seem to just kind of run together in the middle, with my attention span sometimes waning and unable to process when one song ends and the other begins.  Sure, this is a death metal/grindcore album, but it wouldn’t hurt to have a little bit of variation in the music.  Tracks like ‘Evolving Era,’ ‘Ignorance And Apathy,’ ‘Radiation Syndrome,’ and ‘Forward To Annihilation’ do a good enough job at showing that this incarnation of Terrorizer are a little more than just a one-trick grindcore pony, but I can certainly see that not being enough for some listeners.

After multiple sessions of going through “Hordes Of Zombies” a couple of thoughts had occurred to me.  So far we are only about two months into 2012 and there has already been a large amount of excellent releases in the realms of death metal and grindcore, and maybe I am a little bit spoiled by it.  The other thought was that this has to be better than “Darker Days Ahead” was, so my expectations weren’t exactly too high for this Terrorizer record.  But, I must admit that there were some moments in “Hordes Of Zombies” where I was pleasantly surprised with what was thrown at me, and others where I found myself nodding off or feeling as if this is just “another Terrorizer song.”  “Hordes Of Zombies” is by no means a must-have death metal/grindcore album, but after how stunningly bad “Darker Days Ahead” was this is a major step-up for the band and is at least worth checking out if you have a morbid curiosity to see how Terrorizer has come back from the ashes.  Just do yourselves a favor and don’t get your hopes up for a return-to-form in the vein of “World Downfall,” because at this point that will never happen.