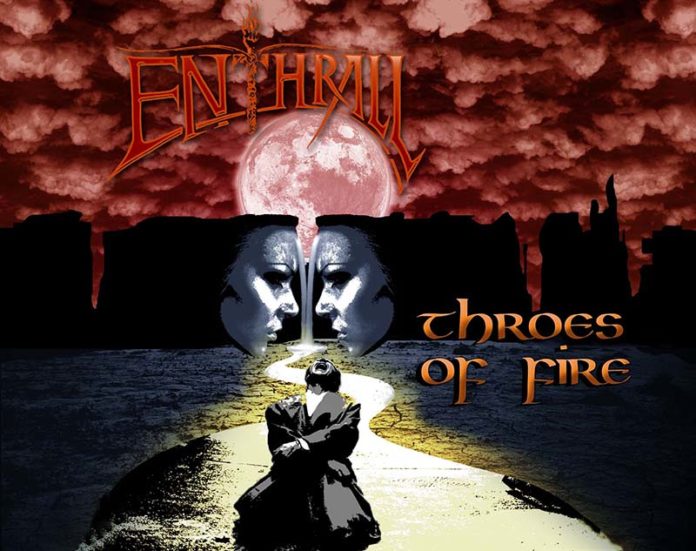 My first exposure to Enthrall’s 2011 album, Throes Of Fire, didn’t exactly make a stellar first impression. From what I can tell, sole member Neil Rego rigged up an unintentionally hilarious YouTube video declaring his new album to be among such metal classics as Metallica’s Master of Puppets and Iron Maiden’s The Number of the Beast (and Disturbed’s The Sickness-seriously, dude?). Rego is overselling himself a bit-when he makes comparisons like that, how could he not? In reality, Throes Of Fire is an occasionally charming but mostly confusing stab at bridging several genres of metal while being not particularly proficient at any of them.

I’ll be fair-the quality of music should be judged on the music itself, not on whatever statements the artist may have made or whatever grandiose trappings it may have been given. Still, track 1, “Burden”, doesn’t restore a lot of confidence. When your album’s opening song relies on an underproduced 16th note chugga-chug progression without much else going on, you’re already selling yourself short. Rego’s choice to emulate ‘80s Geoff Tate isn’t a bad idea on paper, considering the material he’s singing over, but pulling off falsetto without crossing over to cheesiness is becoming a tougher and tougher act to pull off. The track is a blending of head-scratching moments-what’s with the Casio keyboard ending and the disco beat under the guitar solo? It’s like Rego knows that being diverse is the key to prog, but doesn’t really understand any of the ingredients he throws into the pot.

The second song, “The Bullying Bull”, sounds like Rego tried to smash Madball and the Power Rangers theme together; that is, it sounds so ‘90s it’ll make your face scrunch up. Also if I’m hearing this right the opening line seems to be “Stalking the classroom, I look for the meat”, which, I don’t even know, man. Rego hypes up his ability in his two (TWO) included bios to bridge the gap between old school and new, but in practice this seems to mean abandoning any kind of coherency in favor of throwing every kind of melodic metal at the wall and seeing what sticks (not much). And dude, PLEASE get a new keyboard. The intro of “Stoned” gave me flashbacks to Zelda: Ocarina of Time, and not in a good way.

Still, I find it hard to be too terribly down on this record. You can tell Rego thinks everything that he’s doing is a good idea, and he’s put some passion into it. His multi-instrumentalist capabilities are admirable. And occasionally something so goofy it’s charming breaks through the surface and makes you smile. His guitar solos just scream “RADICAL” at you like only a California skateboarder can. And he named a song “Lame Sunk Esteem”. I don’t know what that means, but it’d be a good name for some kind of Japanese slam band, which totally needs to exist.

In all, I can’t recommend Throes Of Fire in good conscience. For an album less than three months old, it’s so dated it hurts. It’s pretty evenly split between unremarkable and painfully cheesy. If I took away anything from this record, though, it’s that Neil Rego needs to write the theme songs for new Sonic the Hedgehog games. He’s got ‘90s ‘tude to spare.