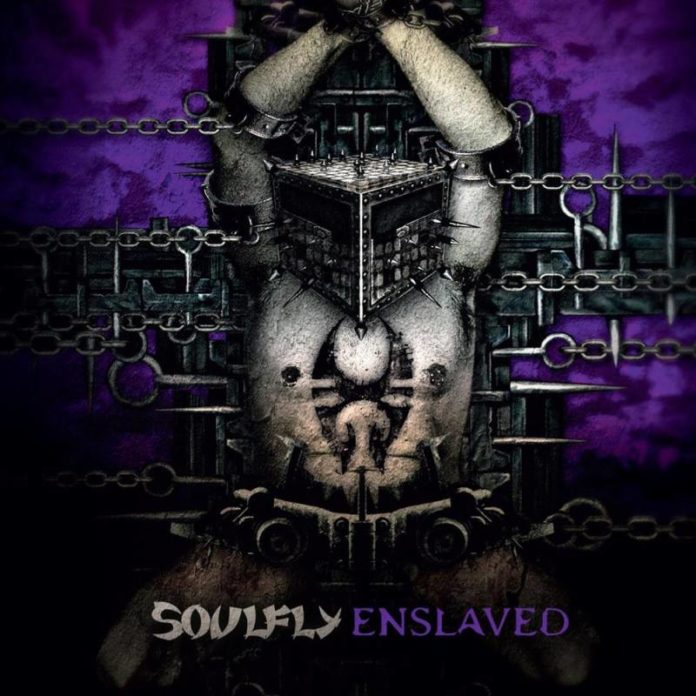 When I was just a wee lad I had discovered Sepultura and was blown away by the intense thrash attack they provided.  I loved their classic thrash/death metal albums, and I even liked a few songs from “Chaos A.D.” and “Roots.”  But, once Max Cavalera left them I got off of the Sepultura Kool-Aid and haven’t looked back.  Once I had heard about Max starting a brand new band called Soulfly that was supposed to be more of a continuation of the “Roots” sound I was intrigued and wished to check it out.  I’ll freely admit that I liked a few nu-metal bands back in the day, so the first few Soulfly albums gelled with me pretty well.  However, I was beginning to tire of their repetitive “Jumpdafuckup”  nature and finally had to abandon them in the way I did Sepultura around 2004, with the release of “Prophecy,” which brought a whole new meaning to the word ‘boring.’  After 8 long years I have decided to stumble back into the Soulfly world and explore their brand new offering, “Enslaved.”

I’m sure by now a lot of us are acquainted with Max’s insufferable lyrics and album concepts, and things are no different with “Enslaved.”  Can you take a guess as to what the this album is about?  If you guessed how free market economics and capitalism are the best way to ensure equality among all people, then you would be wrong.  The real answer is slavery.  That’s one hell of an original concept, right?

Dumb and cliche album concepts aside, Soulfly opens up the album with a short introductory track in ‘Resistance,’ with a simplistic two-note riff that is continuously played for much of the song on top of a double-bass attack.  It’s a better way to open up an album than just another two-minute ambient track that serves no purpose, but Max’s voice is modulated in a way where you are unable to tell what he is saying, and it all comes out garbled except for him yelling “resistance” a few times.  Now, this is where things begin to throw me for a loop.

In all honesty, I was expecting my face to contort into multiple disapproving expressions, but as soon as I heard new-comers Tony Campos (bass; Asesino) and David Kincade (drums; ex-Borknagar) open up ‘World Scum’ with an energetic performance I couldn’t help but feel my neck involuntary nodding up and down.  Once the rest of the band kicks in I realize that this album might actually have some death metal influence to it, especially once I hear Travis Ryan’s (vocals; Cattle Decapitation) growl make an appearance I was put on my ass.  I really was not expecting to hear his vocals in a Soulfly song of all things.  This is by no means close to anything that Sepultura would have put out in the ’80s, but there was no possible way I could have anticipated a thrash/death metal song on this record.

As “Enslaved” continues onward, you are met with a healthy mixture of death, thrash, and groove metal.  Soulfly wanted to create a diverse record, and so far it is definitely holding up to their visions.  You’ll have more catchy and groove-oriented tracks in the likes of ‘Intervention,’ ‘Legions,’ ‘Treachery,’ the first half of ‘Chains’ and ‘Revengeance.’  I think those four songs are the weakest of the bunch as there is just nothing memorable about them.  The more thrash-centric tunes such as ‘American Steel’ and ‘Redemption Of Man By God’ (featuring Dez Fafara (vocals; Devildriver, ex-Coal Chamber)) are okay at best since they are cleverly disguised as Testament b-sides from “The Formation Of Damnation,” except without the eccentric minds of Alex Skolnick and Eric Peterson.  Although I will say that it was interesting to hear Max and his boys doing the entirety of ‘Revengeance’ themselves, with each of them on vocals, guitar, and drums.  The song itself is mid-paced groove and doesn’t really get anywhere meaningful.  His kids do have some talent, but they are obviously not ready for the music industry quite yet.

Besides ‘World Scum,’ I thought that ‘Gladiator’ and ‘Plata O Plomo’ were the highlights of “Enslaved.”  ‘Gladiator’ has a great mixture of melodic death, groove, and thrash metal infused in it.  Max and Marc Rizzo (guitars) do a phenomenal job of packing memorable melodic leads over the rhythm guitar.  ‘Plata O Plomo’ is one of the more groove-oriented tracks, but it’s sung by both Tony and Max in I believe both Spanish and Portuguese.  The groove metal is good, but what I really love about it is the Gaucho-style acoustic guitar that comes in, giving the music a classy flair that sticks with you, plus it is ridiculously cheesy to hear out-dated gun shots that came from John Carmack’s classic first-person shooter, Doom.  Those are the stars of “Enslaved,” and I was actually surprised that Soulfly had it in them to make songs like this.

Honestly, “Enslaved” could have been so much worse than it actually was.  I was prepared to tear Soulfly a new one, but I came away appreciating what was on this disc.  Not because it is groundbreaking in any meaningful way, but the band did a decent enough job of blending death, thrash, and groove metal together.  While the album certainly has its faults, it has a good bit of charm to it, too.  I never really got any emotional response from it, but I suspect that people who are fans of this more light-hearted and accessible style may feel differently than I do, and in a world where we are able to cherry pick whatever type of heavy metal we want, that is perfectly okay with me.  “Enslaved” will definitely surprise the naysayers like myself, and it will continue to appease the Soulfly fans that have somehow stuck around for the past 8 years.  I am actually tempted to stick around and check out their new album whenever they record it.  I never expected that to happen again.