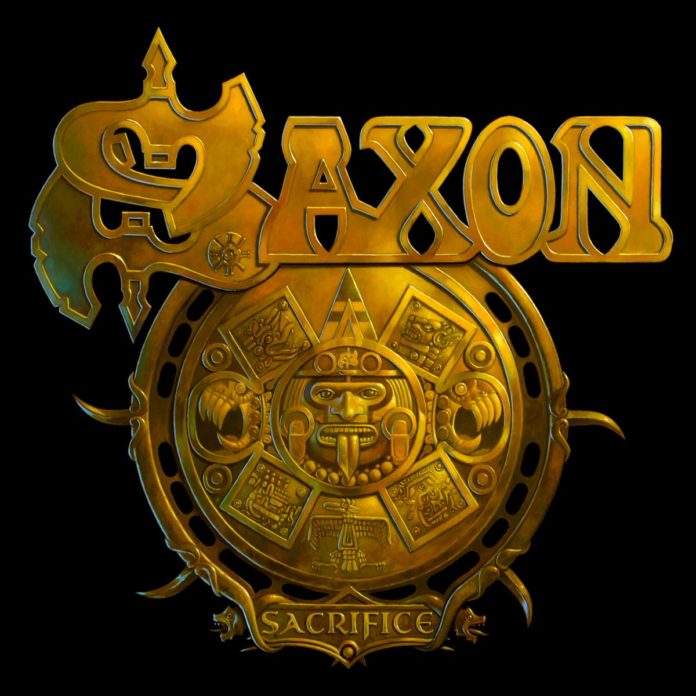 The tenacious UK-based NWOBHM titans, Saxon, need no special introductions. One of the pioneers of the genre, they have been around for nearly 40 years and managed to do that by following current musical trends while still retaining their raw, traditional Heavy Metal approach to music that made them who they are. Their latest effort, Sacrifice, although a record you would expect from these Old-School metalheads, has a few surprises in store.

While the band’s previous release, Call to Arms, was much more Hard Rock oriented, Sacrifice fits into the formula set by albums such as Lionheart or The Inner Sanctum: modern heavy metal sound and production with a lot of traditional 80’s influences. This is simultaneously a good and a bad thing. While I enjoy the band’s post 2000 sound, I’m afraid that they’ve been stuck in a whirlpool of their own songwriting for some time now. There are few points to prove that Sacrifice is not a B-Side collection left over from the highly acclaimed Metalhead or Killing Ground albums. Although the album sounds great the more you listen to it, Sacrifice lacks its own identity, or simply some unforgettable hits such as “Unleash the Beast,” “Dogs of War” or “Battalions of Steel.” Instead most of the tracks take a while to digest, and are ultimately not as memorable or catchy. Few of them, however, come close: the opening title track; enthralling “Guardians of the Tomb” which starts out with an amazing guitar introduction and culminates with a powerful chorus; “Made in Belfast,” featuring a sitar melody during the most of the song; or “Standing in a Queue,” a mid-paced track that closes the album. The rest of the album, however, runs like a flat line compared to these and is significantly more stuck in the 80’s. In regards to the performance and production, not much can be said that would come as a surprise: the band sounds mighty as ever, and Biff Byford shows no evidence of ever aging. This time the production was handled by Andy Sneap, a man known for his love of traditional Heavy Metal, which the end result proves in the best way possible.

In conclusion, the band’s 20th record proves that the British legends still have the energy to rock and the ability to produce a solid Metal record. Sacrifice is definitely more metal than Call to Arms, and if you are a fan of Saxon you will definitely enjoy the entire release. However, the band has proved to be able and willing to produce a much more versatile and daring records than this one, so the fact that Sacrifice is just a typical Heavy Metal record can be somewhat disappointing to the rest.