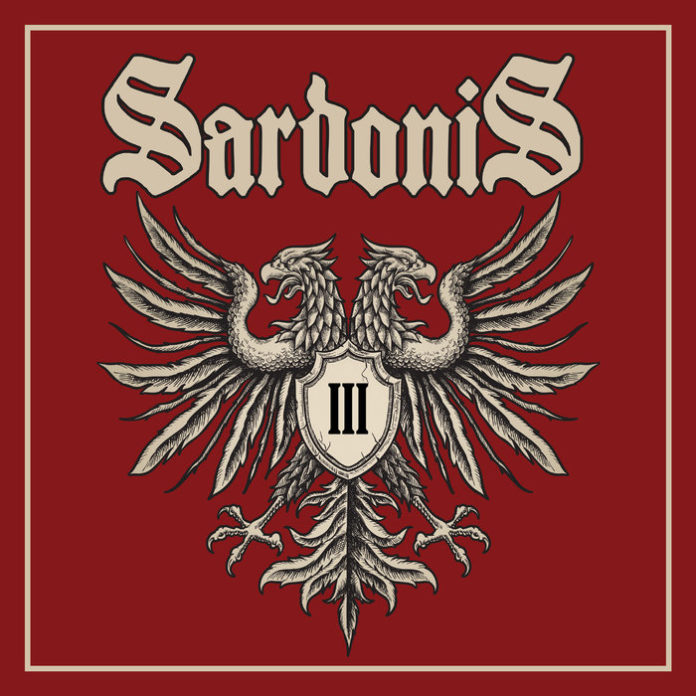 The two-piece has been a popular band configuration in the stoner and sludge metal scenes for a number of years. Some of the most exciting and influential bands in this niche include Om, Jucifer, Black Cobra, and The Body, with sounds that range from hypnotic Middle-Eastern influenced doom, to terrifying blasts of noise and violence. Belgium’s Sardonis look to throw their hats into the ring with their cleverly titled 3rd LP, III.

Sardonis take stoner metal into complete riff-worship territory that is often reminiscent of Black Cobra and High On Fire, with occasional forays into doom in the vein of Sleep and Electric Wizard. Don’t look for any odes to the Dark Lord or the virtues of the almighty marijuana plant, however, since Sardonis are devoid of any vocals. The focus is instead placed on the power of the riff, and III contains some of the best in the genre; the opening riff on track 3, “Roaming The Valley,” could easily be on a Cough record, while “Battering Ram” has a more upbeat, thrash vibe. Sardonis manage to hold your attention despite the lack of vocals, never sticking to a riff long enough to get monotonous.

One concern that always proves itself to be unfounded in the two-piece set-up is that there won’t be enough low end, and Sardonis again prove that two is plenty for a stoner/sludge outfit. III is mixed extremely well, with a rich guitar tone that occupies enough sonic space that bass guitar is rendered unnecessary. The drums are ever-so-slightly lower in the mix than the guitar, which again brings the focus back to the riffs.

The only real complaint here is that, even though the production is excellent, and the interplay between guitar and drum is seamless, Sardonis don’t do much to differentiate themselves from their influences. While I find myself bobbing my head along to the riff, as I do it I’m usually thinking of the other bands that each riff sounds like. This isn’t to say that Sardonis are copying any other bands, it’s really more a commentary on the genre as a whole. Still, III has quite a lot going for it, and will definitely please most fans of the genre.