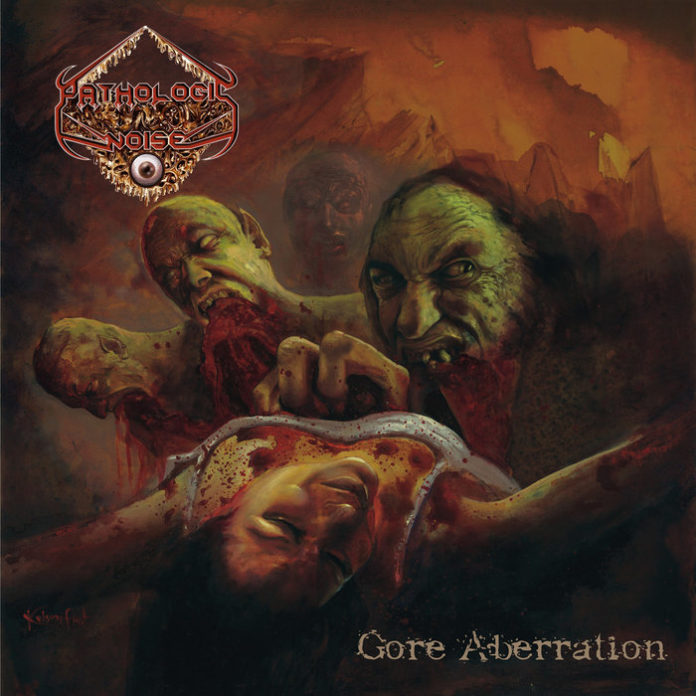 Running under half an hour in duration, this new album from the Brazilian death metal scene draws some clear flavor/style from goregrind’s efforts to repulse and batter audiences.  From the cover art to track titles such as “Sexual Murder”, “Never Ending Blood ‘n’ Hate”, and “War Lust (Queen of Carnal Pleasures)”, the band revels in visceral imagery, and their performances here do a good job of meeting the brutal expectations those trappings suggest.

Top honors probably go to the drummer, who lays down some thick storms of beats without it getting too stale.  He does dip into rattle-beat fills sometimes, giving a musical nod to the gore influences, but a good portion of the music stays in the realm of regular modern death blasts.  The guitarist carves away while the vocals grunt and gurgle, and the bassist gets to enjoy a prominent place in the mixing for his weighty contributions, but the percussion really does steal the show.  The musicians all bust along at high speed, naturally, but they’re sharp enough to leave room for kicking things up higher, harder, and faster when they need it.

They also keep the songs lean, with nothing breaking the four-minute mark, which helps them avoid burning through the riffs too soon and resorting to filler. Still, the band does find room for some twisty bridges and melodic tangents, though they’re always wrapped back into the main runs with quickness; plus, there are loads of 4-to-10-second rips looking to burrow right into the back of your brain.  The songs and album as a whole just get in, do their punishing job (with a little room for indulgence in expansion), and exit with enough alacrity to keep the beats ringing in your ear.  It’s a good strategy to get people coming back after the first listen, and I guess we’ll know by the end of the year whether it worked well enough to catch the attention of more than just grind-focused attention spans.

Sanzu – Heavy Over The Home