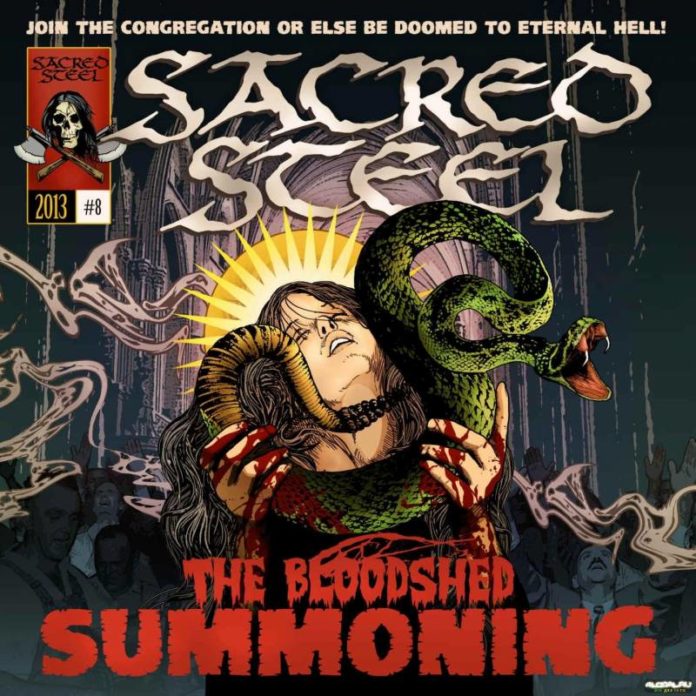 Sacred Steel are well known in underground metal circles. A spiritual heir of Manowar, these guys’ mixture of old-school heavy metal heritage and 90’s power metal never really caught my attention. As much as I like songs about metal, steel and glory, I never really had the will to go through their discography thoroughly. So, listening to The Bloodshed Summoning I must say that I was pleasantly surprised.

Contrary to my expectations, the fact that this is not your typical power metal album becomes obvious with the first track, “Storm of Fire 1916.” The super-charged opener kicks of with a strong thrash sentiment, vocals and riffs worthy of Kreator. The whole album is in fact abundant in traditional German thrash metal elements, which rather came as a shock. The Bloodshed Summoning is packed both with thrash and heavy riffs that although sound generic respectively, together make a great combo. The solo parts stick to this pattern as well: there are some great melodic ones and some incredible shreds. The rhythm section is both heavy and groovy when needed, and does a great job of laying the foundation for both the heavy and the thrash songs.

Another strong point of Sacred Steel‘s sound on this record is Gerrit Mutz‘s amazing singing. His vocals are highly versatile and range from thrash to death growls in “Under the Banner of Blasphemy” to heavy and operatic vocals in “When the Siren Calls,” reminiscent of Geoff Tate (formerly of Queensryche) and Messiah Marcolin (formerly Candlemass). The fact is that this versatility is probably the reason why this seemingly awkward combinations works great in the first place. Also, worth mentioning are the bonus tracks, especially “Dig Up Her Bones,” The Misfits cover, Sacred Steel did a terrific job with.

The atmosphere on the album deserves nothing but praise as well. The band does a fine job of making an eerie and occult setting, in the vein of classic Mercyful Fate. The 90’s style production contributed a lot to this feeling as well; but still, apart from all this, the album sounds generic at times. There are a lot of great and catchy riffs, but also a lot that can be considered washed-out and cliché (pay attention to the thrash verse of “Crypts of the Fallen”). I also noticed that the album sounded great the first time I’ve heard it, but the more I listened to it the more I begun loosing interest in playing it anytime soon.

Nobody can refute the fact The Bloodshed Summoning is a great album, especially if you are a fan of old-school or the 90’s scene. The band merged everything of worth from those golden eras of metal music, and ended up with a result that will surely satisfy those who hunger for this type of sound. For the rest this album has a little to offer, and although interesting and versatile, I doubt it would keep their attention for too long.

Timeworn – Leave the Soul for Now