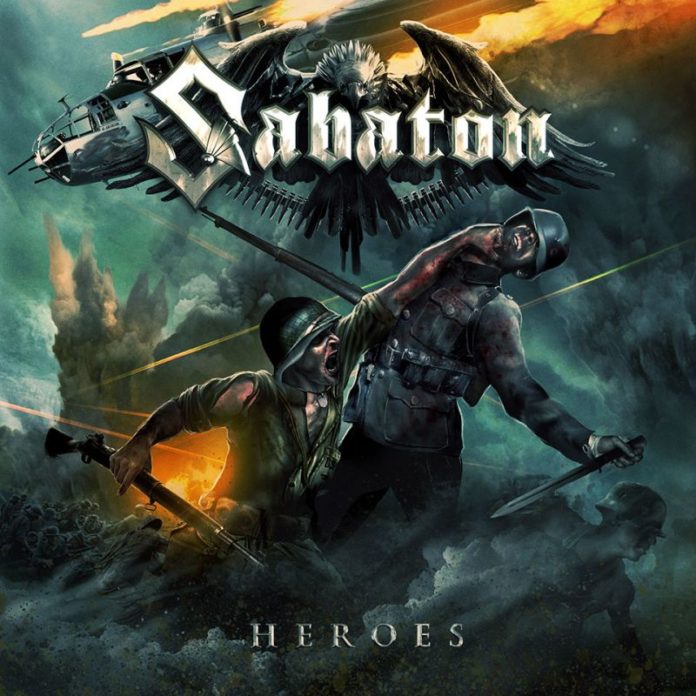 Violence and war are a common topic in metal. From Metallica’s “One” to Megadeth’s “Symphony of Destruction”, and 95% of Manowar’s discography, countless bands have used our fascination with destruction in their art. While sometimes, as in the case of Manowar and Amon Amarth,the stories of battles acquire a more epic and glamorous tone, material like Black Sabbath’s “Children of the Grave” and “War Pigs”, or Iron Maiden’s “2 Minutes to Midnight”, serve as criticisms to hawkish politics, reflecting on the horrors of war. Sabaton appear somewhere in between these two extremes, sometimes singing the praises of soldiers and warriors of old, and others simply describing the sad tales of battle.

Although following the very successful Carolus Rex (2012, certified platinum in Sweden), fans and critics alike were doubtful as to what to expect from Heroes. With a new drummer and new guitarists, this was a completely new Sabaton, with only Pär Sundström (bass) and Joakim Brodén (vocals) remaining from the old guard, so questions arose as to how much of the magic still existed. Having listened to this album enough times to memorize some of the lyrics, I can assure you that it’s not that Sabaton are back, it’s that they never left. They’re here, stronger than ever.

Lyrically, Heroes continues where Coat of Arms (2010) left off, devoting all the songs to events surrounding World War II, with only a marginal mention of the Vietnam War (“Soldier of Three Armies”, as Lauri Törni, the subject of the song, also served there). Although a larger variety of topics would have been welcomed, WWII is certainly a fertile ground for artistic works, with more stories of heroism and tragedy than we’ll ever be able to tell.

Having been (stupidly and unjustifiably) accused of Nazism in the past, Sabaton took the risky step (in an industry where the media is always looking for a moral panic) of praising some of the German heroes of WWII (“Hearts of Iron”), who risked their lives to save German civilians during the fall of the Reich. It’s a touching song that tells the tale of the young German men who found themselves in the frontlines, and who now had to ensure their people were saved from certain death at the hand of the Soviet hordes. With the words “it is not about the Rheine, it is not about the Reich, it’s about the men who fought for them, what peace can they expect?” Sabaton remind us that war affects every side of the conflict, and that soldiers are often no more than pawns in the hands of their leaders.

The album is rife with dark lyrics, much more so than in previous releases, such as the horrific tale of Polish hero Witold Pilecki (“Inmate 4859”). This is a man whose balls were so big that they required a separate uniform, as he deliberately got himself arrested and sent to Auschwitz in order to assist the resistance (the Communist Polish Government demonstrated their gratitude by having him executed in the postwar years). Same happens with the story Karel Janoušek (“Far from the Fame”) who served in the Czech resistance movement, only to be executed by the Marxist government after the war.

The sound of the album departs a bit from what was seen in Carolus Rex, with considerably less priority given to the keyboards (compare “The Lion from the North” with “Far from the Fame” to get an idea). Although instrumentally the album delivers perfectly, with enough raw power to make you want to stand up and invade your neighbor’s yard, it isn’t exactly a showcase of instrumental virtuosity. This, of course, doesn’t take anything away from the album, as that virtuosity would have been simply uncalled for. The production, handled by Pain’s Peter Tagtgren, really packs a punch, even if at times the bass seems to be hard to find (which is odd, considering bassist Pär Sundström‘s role in the band).

Heroes demonstrates that Sabaton are far from being over. They set themselves out to conquer Europe, not only by pandering to local nationalisms, but by delivering a great musical product. With their songs they demonstrate that we do not need to look elsewhere to find tales of beauty and horror, of heroism and cowardice, of triumph and infamy. This in an album that you simply cannot afford to miss.[signoff predefined=”Signoff 1″][/signoff]

Check our interview with Joakim Brodén about Heroes!