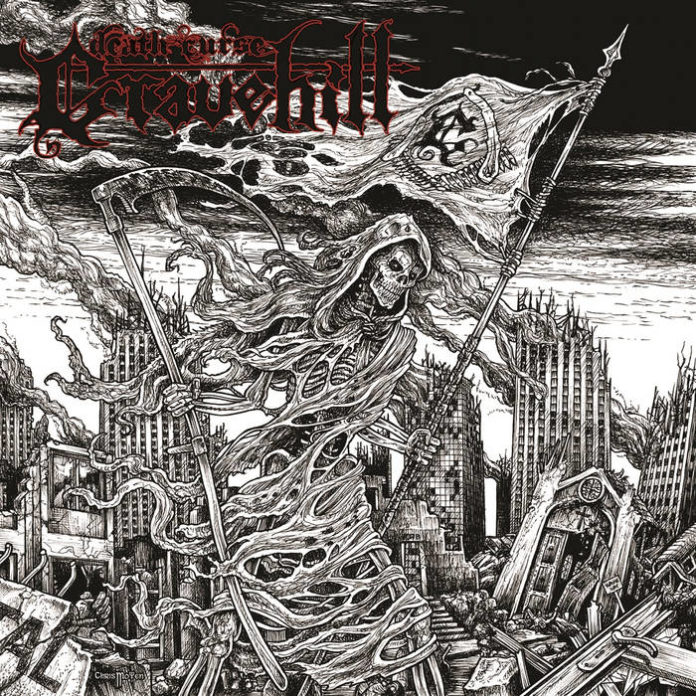 Heavy metal has always been about extremity. Ever since that legendary band of Brummers first created the sound back in 1970, every metal band has sought to push the envelope of what’s considered music, what’s considered loud, or what’s considered to be in good taste. But with the genre now entering its 44th year of existence, being extreme doesn’t come as easily. Venom‘s lo-fi Satanic majesty served as a blueprint for all those to come while terrifying the world’s overbearing mothers, but now their antics almost seem quaint. When you’re trying to be extreme these days, you have to put a lot more effort into it than you would have earlier in history. In that respect, Gravehill‘s Death Curse could have come from at least ten years ago, and not in the heartwarming vintage sense. I keep feeling like I’ve heard it all before, but not in a good way.

The lyrics are cliche, but that’s okay. Song titles like “At Hell’s Command,” “Crucified,” and “Fear the Reaper” are textbook death metal – especially with the latter’s gang chants of “FEAR!” halfway through. It’s themes and concepts that death metal’s already done to, uh, death. But how many black metal bands out there sing about Satan? How many doomers about Lovecraft? Familiar as they are, the lyrics serve their purpose. They don’t get in the way of the rest of the album. The problem is that the rest of the album isn’t pulling its own weight.

There’s an atmospheric intro track that serves its purpose well enough, and the title track follows with a galloping maelstrom of classic-minded death metal. Chromatic riffs fire off in quick succession, with raspy vocals and machinegun drum salvos bolstering the assault. The album runs out of steam soon after, and the riffs become repetitive and monotonous. They’re the same menacing Phrygian mode chords that we’ve all heard as far back as Slayer and Possessed. While this is true of a lot of other bands out there, what makes their riffs work is sprinklings of variety like a bass fill, a harmonics pinch, a Tom G Warrior grunt – anything to distract you from the fact that you’re listening to the same riff over and over again. But with Gravehill, you’ll get four bars of the same three chords on the scale, and then you’ll get four more. And then eight. It gets to the point where you have to imagine flourishes that aren’t there to keep yourself interested, and the worst part is that I know Gravehill has the capacity to make these riffs interesting. The drumwork is solid, and the solos rip face. But with plodding riffs like these, they’re swamped in a sea of mediocrity like microscopic diamonds in the all-encompassing rough.

With the musicianship on display here, it’s clear that Gravehill can do some excellent things. But as far as the riffsmithing goes, it’s hard to tell what those things will be. There’s a track here and there that will keep your attention, but most of the album is only remarkable for somehow making death metal boring.

Man, what a shame. I think Gravehill is really awesome, but it sucks to see that they couldn’t live up to expectations this time.

The album is streaming plus up on YouTube so if anyone hasn’t heard it, it’s up everywhere. This is a fair review but I’m glad it is in the minority of opinion at the moment. Cheers for the pro review, Metal Blast!

Hessians can be a rabid lot at times! Hahaha Although I don’t agree with the review I appreciate the professionalism which is what really matters. It will make me come back to this site more and more. Cheers, J!

Then I definitely suggest you join our mailing list. We regularly send information with what we have posted; zero advertisement. Due to facebook’s increasing restriction on the reach of our posts (although you should definitely follow us there too!) we’ve found that this is the best way to keep everyone informed.
Thanks for the support and stay metal!