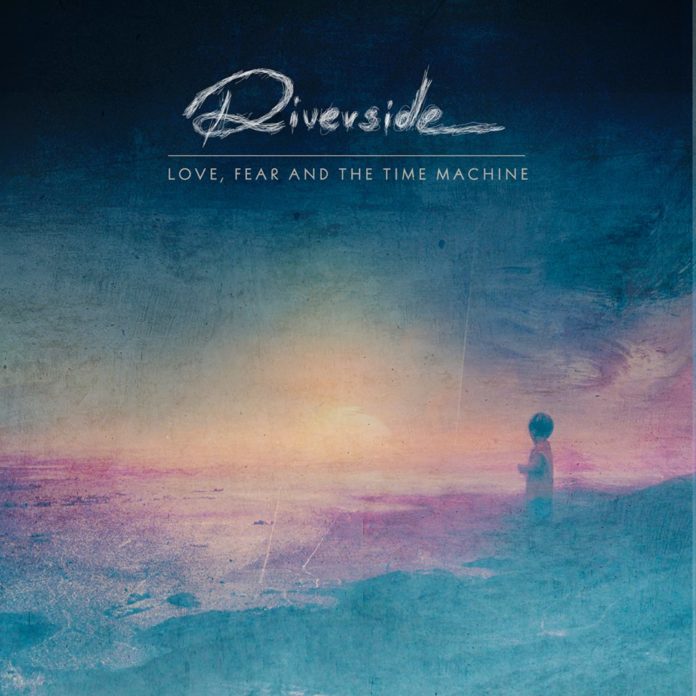 Riverside have always been one of those bands I see on the Youtube sidebar, and that I’ll click on the basis of a cool title or album artwork. They were always a short flash in the pan for me though, as they would fail to hold my attention long enough to make me want to listen to their whole hour-long album. Seeing Fear, Love, and The Time Machine coming out I decided that, perhaps, it was time to give them another try and actually sit through the entirety of at least one of their albums, and I was not disappointed.

The album begins in a very mellow and calm way that brings back an oddly specific memory of Jethro Tull’s “Cheerio”. The difference here, however, is that this is an introduction, not a conclusion, and the band is aware of this as they begin to layer in different elements to the sound. I’m a sucker for build ups like these and Riverside do an excellent job of it, starting with an ambient organ backing where the vocals slide in cleanly after, followed by a sneaky little bassline and even ska and harmonizing elements. Soon enough, the guitarist wakes up and explodes the whole thing, kicking everybody into high gear and energizing the once calm mood while still keeping things upbeat.

The most impressive part of the album is the wide range of tones and moods that are achieved while still feeling like one cohesive piece. At times the sound is reminiscent of a young Dream Theater, back when they sounded at least a little cheerful in rich, full tones. Then at other times it sounds much like the work of current Opeth, crafting a sinister feeling of suspense through well-placed and properly mixed bass lines.

Despite the similarities, Riverside still manage to keep their sound unique. There is just an overwhelming feeling of calm and peace that seems to be omnipresent in the sound, and which gets shaken away by moments of insanity and panic; still, just as a pond would return to shape after being pierced by a stone, the calm always returns and blankets everything. This may be a bad thing if you’re looking for something to get your blood racing and body moving, but that is clearly not what the band intended, as they have laid a smooth track of groove to shape their melodies upon.

While Riverside may have influences from many other progressive bands, they still have their own unique sound. Fear, Love, and The Time Machine is a well-developed and crafted piece with a clear structure and purpose that has a commendable level of variation in the mood and tone. I may not have had the patience to give the band a fair shake in the past, but now I might peruse their catalogue and see what else they have to offer.

IN A NUTSHELL
Excellent production, made me want to give them another chance.
POSITIVES
Smooth groove
Varying mood and tone
Well constructed
NEGATIVES
Some fat could stand to be trimmed.
4