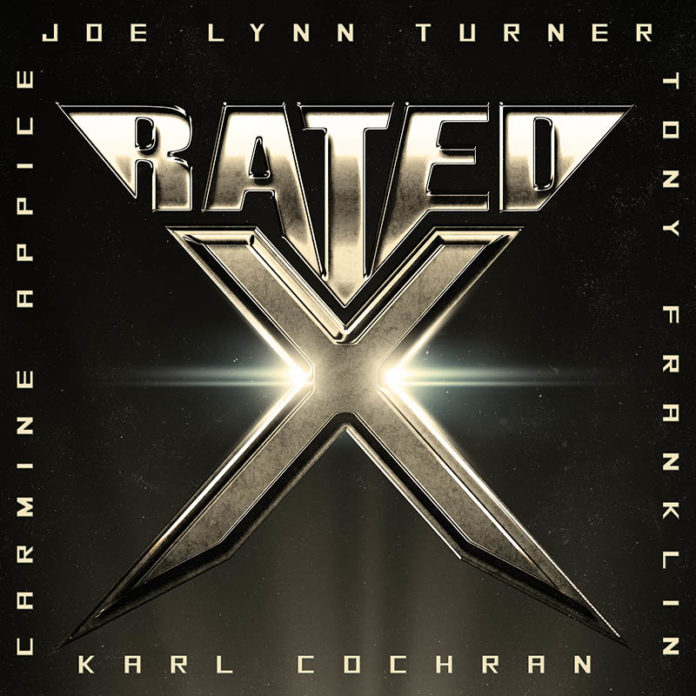 So called “Super groups” can often be very hit or miss affairs. They’re usually cobbled together at the behest of different label execs in an attempt to cash in on the name recognition of the artists involved. It doesn’t always work out as planned (see: Contraband) but on occasion, when the right people are put together, some great music can be the result. That’s what has, thankfully, happened with Rated X, the newest project from former Rainbow vocalist Joe Lynn Turner, Vanilla Fudge/King Kobra/etc. drummer Carmine Appice, ex-Blue Murder bass guitarist Tony Franklin and JLT guitarist Karl Cochran.

While the direction of the band is a predictable one for all of the involved musicians, the quality of the songs is what makes the album worthwhile. There’s always been a certain honesty in the kind of schmaltzy melodic hard rock that JLT has cranked out through the course of his career, and Rated X is no different. From songs about staying true to oneself (“This is Who I Am”) to odes to the fans (“You are the Music”) to straight-up ballads (“Our Love is Not Over”), it’s all meticulously constructed and delivered. Everyone gets their moments to shine too, throwing lead passages and licks in tasteful places. Even the uncredited (from what I can see) organist is all over the place, adding subtle textures to every song that elevates each one of them. These guys are all obvious professionals with tons of experience, and they prove it all over this record.

The album sounds fantastic as well, producer Alessandro Del Vecchio opting for a dry, open sonic palette that allows the songs to breathe. It’s certainly not the most powerful hard rock production out there, but it’s light and playful, giving the musicians lots of room to throw out their licks, without overshadowing the other performances. There’s an obvious lineage to Turner‘s old Rainbow albums from the early ’80; records that dialed back on the heaviness and fantasy of the earlier, Dio-helmed, efforts and went instead for a more grounded, melodic approach.

If there are any weaknesses to be found, they lie in the very things that make the record so successful. Del Vecchio‘s production choices, while necessary for this kind of songs, result in an album that isn’t sonically powerful. So, the more aggressive tracks, while still thoroughly enjoyable, ultimately lack the kind of punch that could have made them even better. There are also moments where the organist overshadows Cochran‘s guitar work, momentarily pulling the listener from his immersion in the song. Still, these are flaws that anyone familiar with a lot of Turner‘s previous output will be aware of, and they still don’t do much damage to the record.

Rated X is a varied but expertly balanced record made by a group of old pros who haven’t lost an ounce of their chops or swagger. If you’re in the market for melodic hard rock that doesn’t skimp on the “hard rock” part, this may be one of the best purchases you make this year.

A fun, lighthearted document made by consummate professionals. Thoroughly recommended.
Open, breathing production work
Varied songs that are meticulously constructed and performed
Sometimes lacks power
The keyboards can be distracting
4.5