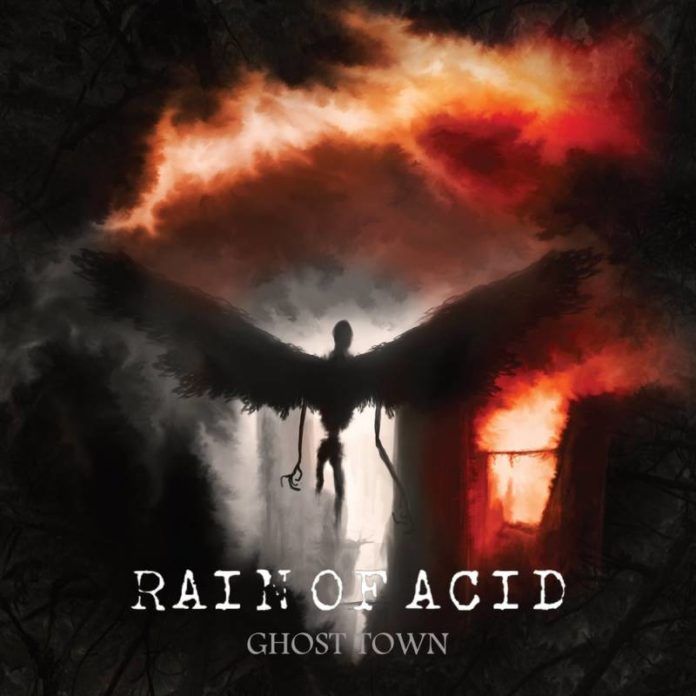 More often than not as a reviewer one comes across an album which evokes no extreme feelings, no soaring highs of passion or crushing lows of disappointment. These albums are the hardest on which to form an opinion – mild apathetic enjoyment is hardly an inspirational state – especially in a genre about which you’re passionate. Finnish melodic death metal band Rain of Acid and their sophomore release Ghost Town represent one such case: superficially pleasurable and entertaining, but nothing more.

At heart, the problem of Ghost Town is in its similarity to recognised leaders of melodic death metal, in particular the doomier sound inspired by Insomnium and the more melodic Gothenburg sound of (earlier) In Flames. As a result, the album is readily enjoyable, but it begs the question: where the influences are so obviously apparent, why not just listen to the more musically successful protagonists?

This is immediately apparent from the very first track on the record, the acoustic ‘Intro’ leading into the meandering gloom of ‘Unveiled’. The pattern continues with the following track and lead single from the album, ‘The Tower of Glass’, with both an In Flames-style opening and Insomnium-esque blasted verse and solos. There are no sounds here that I had not heard before, even as far back as a decade ago.

I don’t want to give the wrong impression: Ghost Town is a decent release about which there is plenty positive to say. The pacing and tracklisting work very effectively – the more sparse and downbeat ‘Wasteland of Dreams’ (track 5) enters at a perfect time to break up any potential monotony of sound. Similarly the self-titled track ends the album on a particularly strong note, a steady groove, a rise to a great climax and a suitably fitting subdued fadeout.

It is telling and unsurprising that these strongest tracks are also those in which Rain of Acid stray a little more from the sound of their inspirations. The band have definite potential here, and given that this is only their second album there is still much scope for experimentation and expansion. That said, this is a release to which I’ll probably only return once or twice. If you’re a die-hard melodic death metal fan then there is plenty in Ghost Town to enjoy; then again, if you are a die-hard fan, you’ll more than likely appreciate the finer original influences.