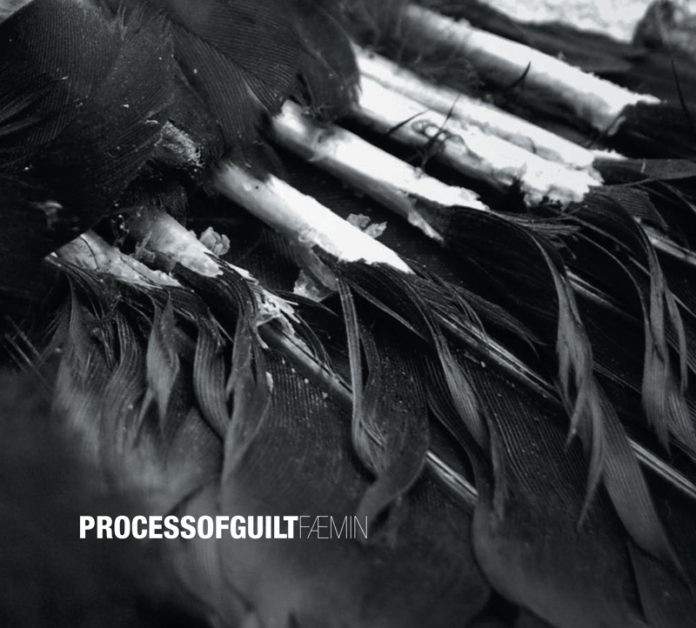 A wise man once told me that good metal comes at two speeds-incredibly fast and incredibly slow. My first loves in metal were the legendary thrash and NWOBHM metal bands of the ‘80s-your Slayers, your Maidens, what have you. So you can see how I was on the side of speed for much of my metal upbringing. As I got older, though, I grew to appreciate the menace, atmosphere and tension of slower stuff, and now I worship Isis so I guess I’ve been brought over to the slow side. I mention all this because Process of Guilt are bringing the slow and heavy on their third album FÆMIN, and since I’m not Sam, our resident doom expert, I want you, the reader, to know that I’m at least somewhat qualified to talk about this record (at least compared to high school me).

The Portuguese death-doom outfit certainly delivers the slimy, murky goods on this record. Lumbering and colossal, these songs sound like marches into an evil swamp. My biggest fear going into FÆMIN was that, like some doom, it would drag and get lost in itself instead of keeping me interested; fortunately, that fear was quickly assuaged once I got my teeth into opening track “Empire”. Once I got into its crushing groove, the minutes flew by and I quickly found myself on to the next song. To me, that’s the mark of a great, long song-it doesn’t feel nearly as long as it is. Track 2, “Blindfold”, builds on that momentum and slams straight into an ugly, sludgy jam. Once this record gets the ball rolling, there’s no stopping it until it’s crushed everything in its path. Though the riffs are appropriately heavy, I have to commend Process of Guilt for not relying solely on the riffs to guide them through this record-the eerie, almost ambient single note leads over the driving riffage sound positively otherworldly.

“Harvest” incorporates wah-ed out leads punctuated by savage screams courtesy of vocalist/guitarist Hugo Santos to great effect; positively evil and hateful sounding, I found myself unconsciously banging my head along to the track, which felt all too short despite its six-and-a-half-minute runtime. Fortunately, “Cleanse” is there to pick up right where if left off-the song eases you in with a haze of feedback and a rumbling bassline, and I was expecting the heavy guitars to crash back in at a moment’s notice, but instead the song builds on its foundation and I found that the heaviness had slowly set it around me, like a fog coming in, rather than picking one moment to emerge again. By the time the eerie guitar leads came in near the end, I was having a ball. Finally, the eleven-minute title track takes us home, perfectly capturing the feel of the entire record-combining the atmosphere of doom with the aggression of death, this Portuguese outfit manages to sound contemporary with their modern doom peers while remaining powerful and engaging. And man, seriously, that riff that kicks in at 4:30 or so…glorious.

Doom-dealers, if you’re looking for something to crank, you’ve found your next record purchase. That goes for fans of slower, groovier death metal, too-Process of Guilt have nailed the, well, process of intense buildups before crushing payoffs. Turn down the lights and bang the head that doesn’t bang.