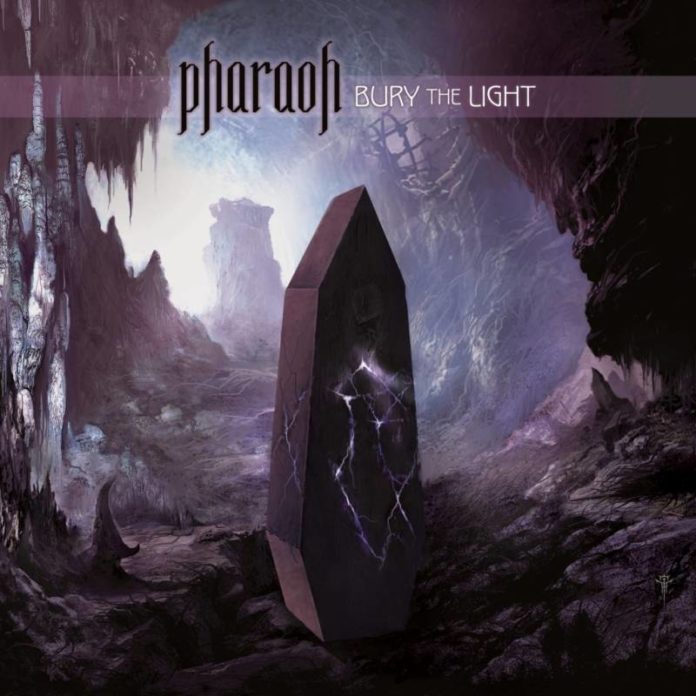 Power metal comes in a few different flavors, and a lot of them can be straight-up bad. When most of the genre is made up of keyboard-twinkling, falsettoed screeches and tales of knights and dragons, hunting for bearable power metal can be a challenge, but occasionally you find a band that remembers that metal is supposed to visceral and exciting, not melodramatic and swarthy. Philadelphia natives Pharaoh have been serving up just the right kind of high-energy, no-nonsense power metal the metal world needs since their debut album, After the Fire, hit in 2003, but their new effort, Bury the Light, might just be the kick in the pants power metal needs to stop paying attention to new Nightwish albums and get back to basics.

You could attribute Bury the Light’s strength to its membership-featuring current and former members of Nachtmystium, Dawnbringer and Control Denied-but if you ask me, it has more to do with its roots. It’s more Mercyful Fate than Kamelot, going heavy on the intensity and riffage and foregoing the frilly keys and orchestral trappings. Opening tracks “Leave Me Here to Dream” and “The Wolves” fly high on guitar leads and intense deliveries by vocalist Tim Aymar, but the first truly strong song is “Castles in the Sky”. Opening with a crystal clean, almost jazzy lick, Aymar layers his screeches in a way that calls to mind Blind Guardian vocalist Hansi Kürsch. Guitarist Matt Johnsen has a field day with the track, tossing finger-twisting leads and harmonies left and right. While power metal is prone to wankery, Johnsen’s leads are tasteful and rely on memorable hooks rather than unfettered shredding. The bridge features a fun acoustic chord progression; the acoustic guitar rears its head elsewhere on the album, such as the intro to the next track, “The Year of the Blizzard”. While it may crib heavily from Maiden’s Seventh Son of a Seventh Son, the acoustic part of “Blizzard” injects some dynamic variation into the album-it’s nice to have something different from the riffage to break things up.

Bury the Light’s greatest strength is that it’s able to be tasteful. This applies both to the guitar leads and the song structures-the album doesn’t break the 50 minute mark, and most of the songs hang in the four to five minute range. Where many power metal albums try to deliver an epic experience, Pharaoh are content to deliver a memorable, catchy four-minute song like “The Spider’s Thread”, and it’s a welcome departure from what so many others attempt. They do it again with the following track, “Cry”, opening with a prominent bassline before Tim Aymar gives his best Rob Halford impression in the verses, again coming in in under four and a half minutes. Pharaoh aren’t afraid to crib from various aspects of ‘80s metal-whether it’s NWOBHM vocals, thrash riffs or early death metal’s busy double kick-and they manage to combine their variety of influences into a package that avoids sounding dated, despite the ingredients of their melting pot of influences.

Whether you’re hunting for solid power metal, catchy riffs, surprisingly active bass playing or something to air guitar along to (check the first minute of “Graveyard of Empires”), Pharaoh’s latest has something to offer you. Fans of melodic metal, consider the bar set for 2012.