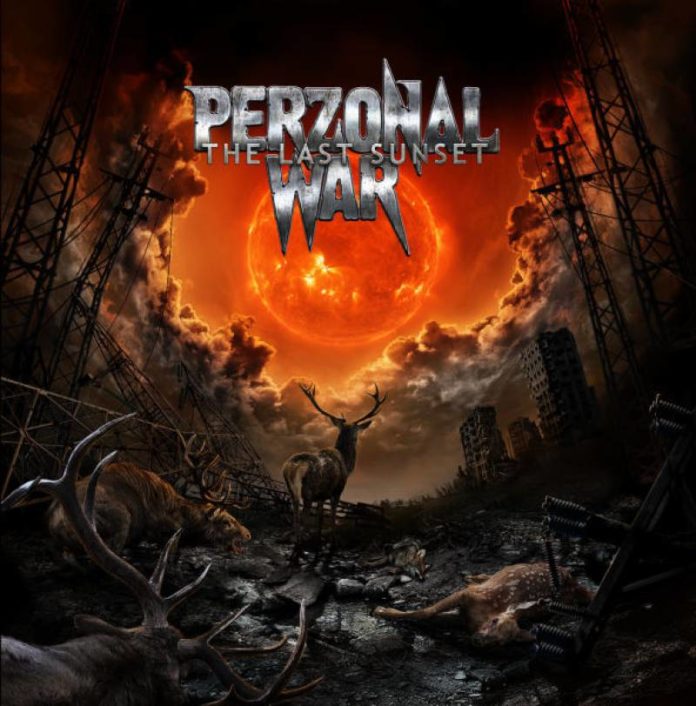 I know that you’re not supposed to judge a book by its cover, but purposely misspelling your band name is, to me, as cringe inducing as a lead singer with a fringe haircut and neck tattoos. Maybe it’s strictly my own biases coming through but… just don’t it. While I wouldn’t say that this kind of things have the ability to ruin an album for me, they don’t exactly help to make a compelling first impression.

Now that I have that out of the way, Perzonal (Ugh) War‘s latest opus, The Last Sunset, comes to the table with a fairly cogent mix of modern European styles formed in to fairly boiler-plate power/thrash kind of fare. Before even getting out of the gate, the band set themselves up to be pretty average overall, and that trend continues the deeper one gets into the album.

When they are playing fast, they find a good amount of groove and pocket, like on album highlight “Metalizer”. However, it seems like they spend half of the album playing these anthemic power metal semi-ballads like “When Faith Has Gone Forever”, which tend to go exactly nowhere as far as keeping the listener’s attention. Vocalist Matthias Zimmer sounds like a million other singers out there; perfectly competent, but hardly unique. Actually, that goes pretty well for the band as a whole. The riffs, the drumming, everything. It’s all kind of just… there. There’s probably a really good EP in here, but as it sits right now The Last Sunset is just a big blob of ordinary.

Even the production adds no flair or substance. It’s clean and polished and thoroughly… there. It’s like there was nothing extra put into the sonic palette: great care was taken to make sure everything was placed precisely and given the proper treatment, but then no one said “hey! the bass guitar would sound cool if it was a little higher in the mix right here!” or anything like that. That may be the kind of gripe that only an obsessive like me would object to, but the mix can, at times, be the difference between a mediocre album and a truly good one. That’s definitely the case here.

This is one of the hardest reviews that I’ve ever written, because there’s just so little substance to latch on to. There is very little that is resoundingly exciting about The Last Sunset, but also very little that is especially or specifically offensive. The whole experience just kind of sits there rumbling away from the first notes to the last. As I said before, there’s enough good material to make a pretty good, engaging EP, provided they worked on sequencing and gave it a little more time to cook on the production front. There’s a lot of potential, but a lot of it has been squandered.

IN A NUTSHELL
I don't know man... Do you have any cash you're not using for anything? There are definitely far worse things you could spend it on that The Last Sunset... but there are also a lot better too. Take it or leave it.
POSITIVES
Everyone is competent and does everything they need to
I have no doubt that there is a truly stellar EP in this thing.
NEGATIVES
Everything is adequate but nothing is extraordinary, resulting in an album that just kind of rumbles along in the background from start to finish.
3