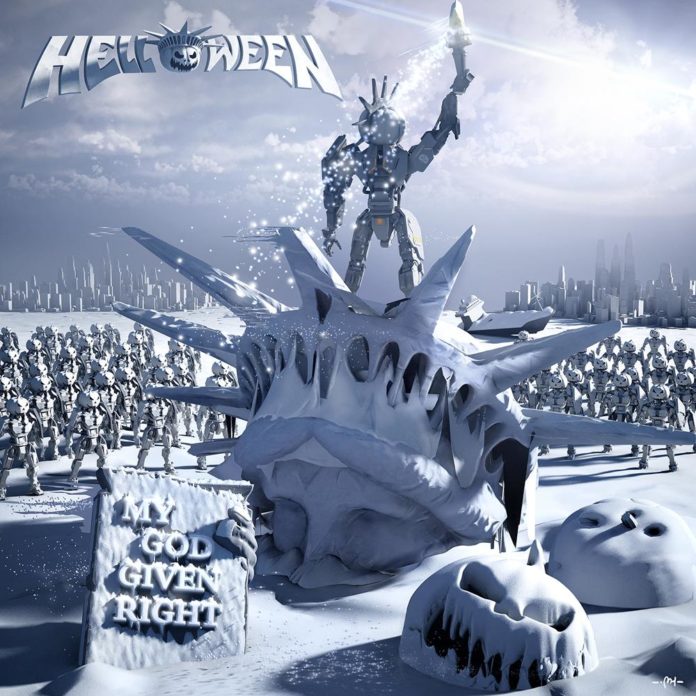 It’s pretty incredible to realize that this is Helloween’s 30th anniversary. It was back in 1985 that Kai Hansen, Markus Grosskopf, Michael Weikath and the late Ingo Schwichtenberg released their debut Walls of Jericho and, in a couple of years, redefined metal as we know it. After all, if it wasn’t for their 1987 opus Keeper of the Seven Keys Part 1, power metal as a genre wouldn’t even exist.

Since those early days Helloween’s story has been anything but peaceful. There have been plenty of line-up changes (Weikath and Grosskopf are the only original members left), and musical and stylistic choices that have alienated many (we all rather pretend Pink Bubbles Go Ape and Chameleon didn’t actually happen); as a result, every new album creates a lot of expectation.

In interviews, Weikath has mentioned that My God Given Right, Helloween’s new release, is more “friendly” than some of their previous albums. While he doesn’t think the album is “commercial”, he does seem to believe that it’s more accessible. Although I agree with his assessment on this, in the sense that this new album is quite easy to listen to, I don’t think that this represents such a big change from what they did in Straight out of Hell. Just as their 2013 effort, My God Given Right continues using the “happy happy Helloween” formula (a couple of exceptions in both albums notwithstanding), and retains the same straightforward songwriting style.

The fact that Helloween are sticking to their guns and continuing their work as they did it in Straight out of Hell shouldn’t necessarily be seen as a negative thing. As the saying goes, “If it ain’t broke, don’t fix it”, and the truth is that if what they did then is still working out for them, then there’s little reason to stray from that path and try something new.

Having said all of this, the extreme ease-of-access of the album did create some problems for me at the beginning. The songs seemed to blend into each other, with few passages actually catching my attention. Because of this, I wasn’t really sure when exactly a song ended and a new one began, simply because it all seemed to just sound the same. And while bands like AC/DC have made a career out of sounding the same, it didn’t seem to be working for me. I knew the album wasn’t band (at no point did I feel like I wanted to skip a song), but I also didn’t feel that it was captivating me. And although eventually the album grew on me, and I came to enjoy it, the feeling that everything was too similar never really left.

Save for the boring ballad “Like Everybody Else,” featuring Andi Deris’ nasal clean vocals, the album is actually full of enjoyable (even if occasionally repetitive) metal (sometimes power metal) tracks. The band has mentioned that there’s a certain desire to mix 80’s “classic Helloween” with the modern stylings of the band, and I think that they have accomplished that. “Stay Crazy” is a good example of this, as it is basically an 80’s party tune, mixed with some of the heavier sounds that Helloween have used in the last decade. The same can be said of the very entertaining “Russian Roulé”, which takes Andi to some pretty high screams, mixed up with some Russian-esque (or Tetris-esque) riffs. The high times continue with “Lost in America” (which brought a lot of memories of “Future World”) and the mandatory corny metal-anthem “If God Loves Rock and Roll”.

The album includes some good throwbacks to more traditional German power metal, like “Battle’s Won” and “Living on the Edge”, the latter of which has some power-ish choruses that bring back memories of the corniest moments of Freedom Call, as well as some of the terrific powerful riffs that Helloween is so accustomed to create. It was a nice surprise to see that these tracks made it into the album, because even though they do move away from the more 80’s hard rock style that, I think, Helloween were trying to emulate, they are absolutely the kind of material I want to hear from the band that gave us “Eagle Fly Free”.

My God Given Right is a good album, albeit one that could have been better. Save for a couple of exceptions (like the hypnotically dull “Like Everybody Else” and “The Swing of a Fallen World”) the tracks are great, and they are promising in a live setting. While it is a good follow-up to Straight Out of Hell, I think that it fails to reach the quality of its predecessor. Then again, the bar was set quite high.

IN A NUTSHELL
A good Helloween album that could have been better. They stick to what they know, and they do it OK.
POSITIVES
Catchy straightforward tunes, with some power metal thrown in for good measure.
NEGATIVES
The songs sometimes seem to blend into each other, with few remarkable moments.
4