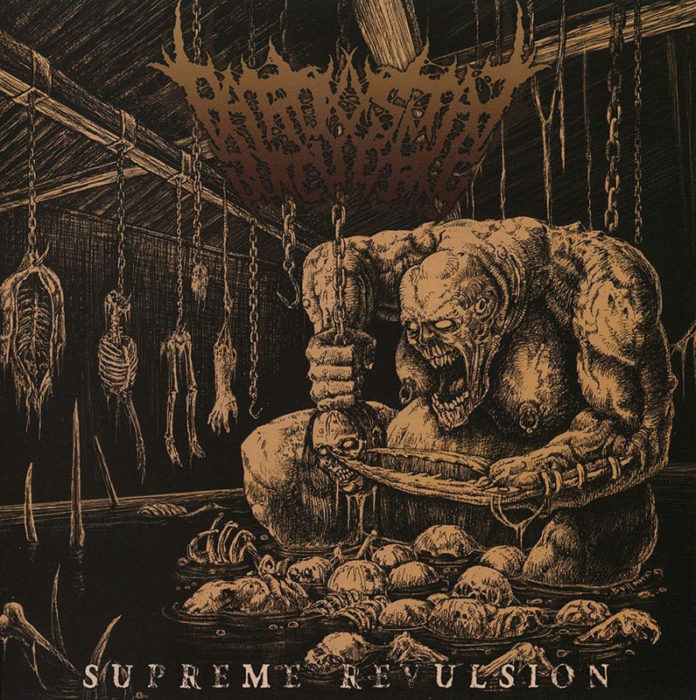 Just look at that cover art.  Look at it.  How could you not love one of those giant fat hand-pincer dudes from 300 holding a severed head on top of several more decomposing corpses?  I have been a fan of Paroxysmal Butchering for a while now and have finally took my head out of my ass long enough for me to write about the compilation album known as “Supreme Revulsion“.  According to Tim Bee (vocals), all of the material here within was recorded before Floyd Winters (bass), Nacho Venegas (drums), and Josh Alvarado (guitars) had joined the band, to which I was shocked to hear that.

The reason why I say that is because Paroxysmal Butchering is a hybrid of older Gorgasm and Severed Savior with a hearty helping of guttural slam.  How in the hell could you ever go wrong with that type of combination?  “Supreme Revulsion” has a ton of energy running through it in every single track.  Tim’s vocals range from low growls to high-pitched wailing that help complement the riffs very well.  This is not “just another” brutal death metal band in my book.  Paroxysmal Butchering has something going for them that not a lot of bands can do, and they have “it”.

Normally at this point I would be listing off what are the best tracks on the album, but I just can’t do it, or else I would be including all of the eleven songs.  There is just so much worthwhile material here that it upsets me that this band isn’t bigger than they currently are, but they have managed to cut out a rapetastic niche of fans for themselves.

If this is the type of material that was being written before the rest of the band has come along, then I am eagerly awaiting to see what this strengthened beast known as Paroxysmal Butchering is truly capable of.  Now that they have a recording contract with Show No Mercy Records and are on the cusp of finishing the recording phase of their upcoming album, I can only hope that they will be giving us little tastes here and there with new material.  In the mean time, contact the band and grab yourself a copy of “Supreme Revulsion“.  Seriously, if there is one underground brutal death metal band that you should pay attention to, it’s Paroxysmal Butchering.