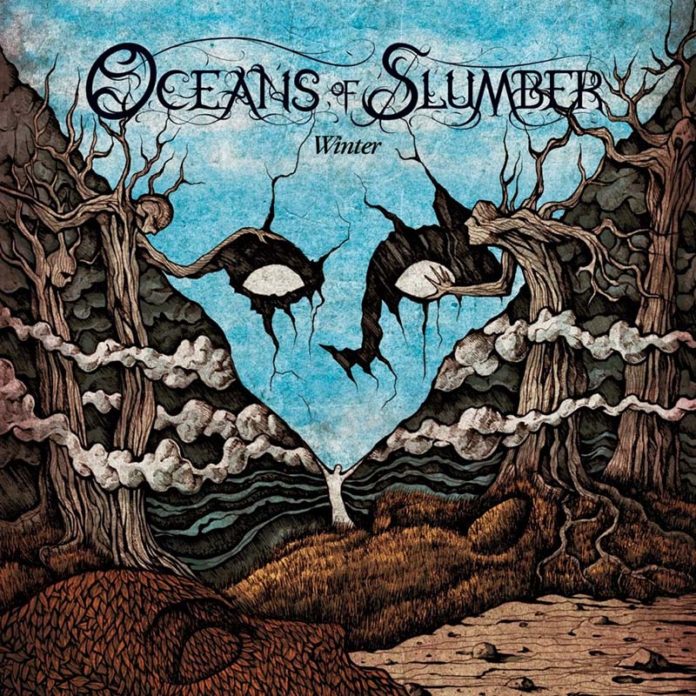 In 2011 Oceans of Slumber crawled from the womb of progressive metal and released their first album in 2013 and an EP in the summer of 2015. Approaching prog from a dark and emotional angle, the band releases their second full album, Winter, marred by the garish use of #winteriscoming in their promo.

From the cover alone I expected a performance with folk elements woven into the mix. I mean just look at the dang thing, there’s Lord of the Ring trees caressing a freaky moon face. Although I wanted wild pan flute solos (and I almost got them in “Good Life”) the most folk that happened was the occasional acoustics and lyrical content. But I digress; the band never promised strong folk elements, (creepy moon faces be damned) so while my naïve hopes were eradicated, Winter still offered value and content.

There is a huge contrast between the vocals and the instrumental part, particularly in the tempos that each element follows. The vocals soar out in a long and winding thread, occasionally making me wonder if lead singer Cammie Gilbert ever needs to breathe. The instruments, on the other hand, play between a fast, choppy rhythm, and a smooth legato flow. There was an unfortunate creative decision in the mixing, with the vocals being brought to the front, almost muting the instruments. There were times when I had to strain to hear the guitars, as they were drowned beneath the vocal track. Don’t get me wrong, the vocals are good, but they should complement the instruments, not suffocate them.

While there are technical issues, the performance in Winter is strong enough to make up for them. A consistent atmosphere partnered with variation in tempo and structure make for an engaging experience. Certain elements could stand to be further showcased or capitalized upon, but that is a matter of artistic decision, not quality. There may not have been folk stylings in the album, but Oceans of Slumber did not disappoint.

IN A NUTSHELL
Strong performance with plenty of character and a unique touch. Give it a spin.
POSITIVES
Powerful vocals
Excellent atmosphere
Varied yet smooth.
NEGATIVES
Questionable mix choices.
4