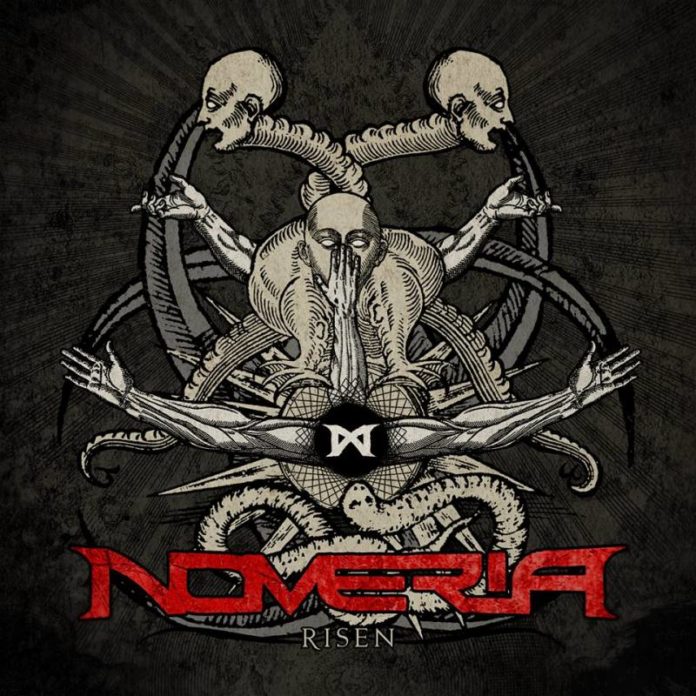 The progressive music revival of the past decade and a half was an interesting phenomenon. Dusting off the ancient gatefolds from your dad’s attic, fusing it with modern genres and pumping it up with the vigour of thousands of talented young minds proved to be just what the new millennium needed to recover from the bleak, nihilistic dirge of the ’90s. The new wave of prog metallers were praised for their artistic dedication as much as their limitless supplies of energy in their performances, channelling the rockstar swagger of ELP and Rush, instead of the pompousness of Fripp. Nowadays prog is filled with innovation, no longer restrained by the worship of its forefathers, and Italian prog metallers Noveria are a shining example of this detachment from the past, delivering a distinct, inspired and modern take on the genre with their highly-promising debut album Risen.

While the basic framework for Risen draws from the heavier side of classic prog, Noveria‘s muses are far more contemporary. Throughout the forty-minute run of the album, the band displays a huge spectrum of influences from techdeath, djent, hardcore and more. Most noticeable is a surging power metal vibe that brings the album to life with the mighty pipes of vocalist Frank Corigliano, whose animated, theatrical and ambitious performances are just stunning to listen to (seriously, the guy deserves a round of applause just for the outro to ‘Downfall‘!), sounding like the celestial lovechild of Cedric Bixler-Zavala and Cam Pipes.

If Corigliano‘s vocals are the driving force, then the instrumentals are the stampeding behemoth. The title track introduces us to Noveria‘s brand of verse/chorus/verse trade-offs between serrated, mechanical riffs (with an impenetrable tone, heavier than the new Nails record) and exhilarating hooks that soar over shimmering keys and bring that ‘fuck yeah!’ quality. Though slightly uninspired, the guitar work on display here is incredibly intricate, complementing the album’s riotous atmosphere incredibly well, similar to the guitars on Between The Buried And Me‘s Colours. The whole album is presented with an epic sheen that comes together with the close-knit chemistry of its musicians. It boasts a seamlessly intense and empowering atmosphere that’s amplified by some of the astonishing performances on display, as well as the vivid lyrical imagery, which conjure picturesque landscapes of space-age panoramas, corrupt monarchies and anarchic, Operation Mindcrime-esque struggles for social upheaval.

Still, with a prominent power metal influence comes a fair share of cheesiness. While the incredibly overdramatic, operatic vocal performances of Corigliano are a joy to listen to, the album could’ve done without the schlocky synth interludes or dialogue segues to set the tone of each song. Thankfully these moments are few, and a blemish on an impressive, thrilling debut. Noveria have developed a remarkably unique and interesting sound early on in their lifespan, and created a tight, cohesive record with electrifying performances and meticulous technical expertise. With a band that seems to soak up its influences from its contemporaries, I can’t wait to hear where they go next.