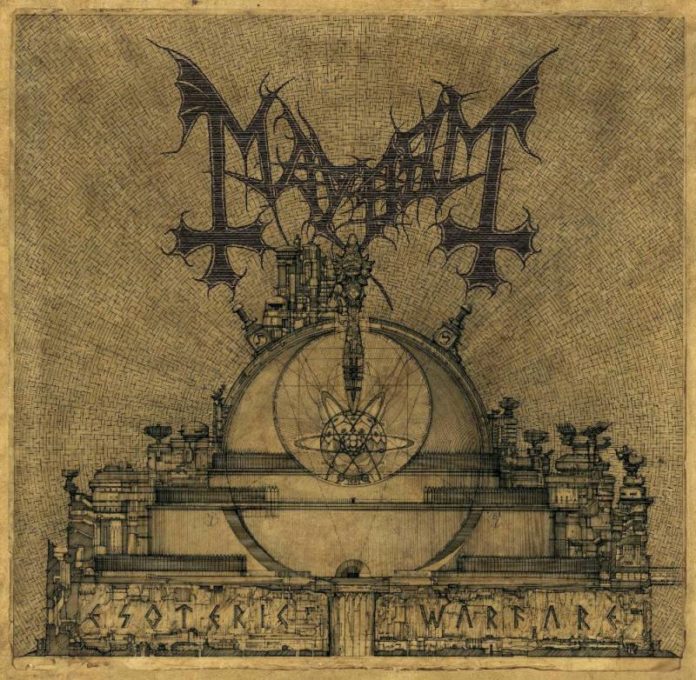 There are few bands as synonymous with a genre of heavy metal as Mayhem are with black metal… and even fewer are more notorious for their “extra-curricular” activities. Mayhem have seen it all, done it all and, in one form or another, lived to tell the tale; suicide, murder, arson, drugs, a revolving door of musicians, and prison sentences have all plagued the band from the very beginning. Still, they would just be an interesting footnote in music history, if it weren’t for the harsh and uncompromising metal that they play. While Mayhem may not be the first black metal band, they’re certainly one of the first bands to play what is now referred to as the second wave of black metal, and have been instrumental in creating the sound and image that you now see today.

Esoteric Warfare, Mayhem’s latest release, comes just in time for the band’s 30th anniversary, and in true Mayhem fashion, marks a new chapter in the band’s history, being guitarist Teloch’s first recordings as a full-time member. Although “Watchers” begins with the kind of discordant guitar tones that were found everywhere on the band’s previous effort, Ordo Ad Chao,  Teloch is not merely a Blasphemer sound-alike, which becomes evident when the drums fade in, along with fast and heavy guitar and bass work. There is a bit more heft in the tone, a little more heaviness than before. Long-time fans of Attila Csihar’s unique vocal approach might be hard pressed to recognize his voice at first, as Esoteric Warfare is full of some of the most straight-forward sounding black metal shrieks I’ve ever heard from him. Sure, there’s plenty of his lower register in the mix, with that odd droning human didgeridoo sound that he does all over Ordo Ad Chao and De Mysteriis Dom Sathanas; there are even moments of death metal vocals, such as on the song “VI Sec,” but this album, overall, is the closest to a conventional black metal record Mayhem have made in quite some time. That being said, Mayhem have never been a conventional band, in that they don’t play in standard 4/4 time, and don’t play verse/chorus/verse songs; rather, they prefer odd time signatures, songs that start, then stop, and then explode back into a maelstrom of guitars, blast-beats, and layered vocals. There’s a dense and overwhelming atmosphere, with atonal guitar chords chiming over quick and intense speed-picked riffs; sudden stops and changes in directions that leave the listener reeling, and the over-dubbed vocals and occasional keyboard pieces create a growing sense of terror. Hellhammer is still one of my favorite drummers, and delivers an excellent performance throughout, though his bass drum sounds a little too triggered at times; Necrobutcher, the sole original member, holds things together and gives a sense of balance to the songs, providing an excellent low-end.

While, in my view, Attila was the stand-out member in Ordo ad Chao, and even though he still sounds as depraved as ever, Teloch is the shining light this time around. He mixes in seamlessly with the rest of the band, and brings some real brutality to the table; “VI Sec” even delves into doom territory with some of the heaviest riffs Mayhem have ever released. My only bone to pick with Esoteric Warfare is that the band uses the start/stop pattern a little too often, causing it to lose its impact after the fourth or fifth song. As for the production, those used the low-fi style of Mayhem won’t be troubled by it, and will actually appreciate the heaviness and claustrophobic atmosphere that it creates; the uninitiated, on the other hand, might find it a bit hard to swallow. Still, Esoteric Warfare wouldn’t pack quite the punch that it does if it was recorded with the latest technology, as the echoey effect that permeates every part of this recording adds to the atmosphere.

Mayhem have proven once again why they are the masters of Norwegian black metal, and have concocted another deadly recipe with Esoteric Warfare. If you’ve never listened to Mayhem before, I’d suggest strapping on a set of head-phones and a helmet, and to prepare yourself for sonic warfare.