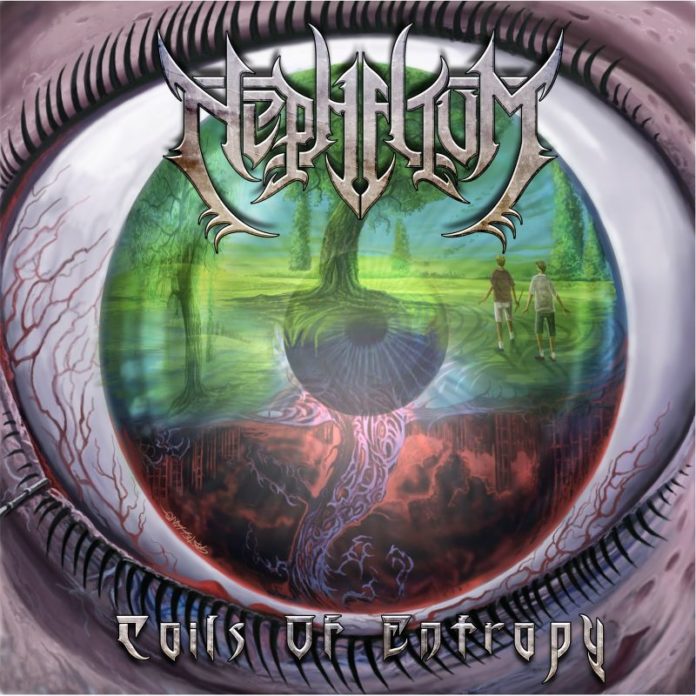 Nephelium is a celebration of all things brutal in death metal: the crunching and chugging guitar riffs, the constant hammering of the double bass, blast beats, guttural growls and screams. Make no mistake about it; this is a very brutal album. In fact, Coils of Entropy is about the heaviest thing I have heard this year.

Originally hailing from Dubai and emigrating to Toronto in the early 2000s, Nephelium quickly became a staple of the Toronto metal scene.  They released a two-song demo Ignite the Wrath of Silence in 2004 but fans have since then waited for a full-length album. It may have taken years, but their debut is finally here.

And some things are worth the wait.

Coils of Entropy is a pleasure to listen to. But not in the sitting-in-your-barcalounger-listening-to-Frank-Sinatra sort of way. It’s one of those albums that grabs you and doesn’t let go. It commands your attention. If you’re listening to it, you aren’t doing much else. And I like that.

Except maybe getting a wicked case of whiplash from headbanging.

The songs on the album very much stick to the brutal death metal style, but each song often goes into progressive tangents with insane drumming from Alan, middle eastern flavoured guitar solos from Alex and James and unbelievably low guttural growls from Boyan.  The tempo change from slow chugs to blistering fast tremolo is done in an instant, the sweep solos are aplenty and the pinch harmonics are bountiful.  In some ways this is album sits closer to Necrophagist than any other band; their technical ability to play is something to be admired and often times feared.  But, tracks like “Malediction” and “Halls of Judgment” really showcase the band as a group, not just as individual members (which would be fine) it’s marvelous to hear how the band members come together and don’t let their technicality get the best of them.  They could go off by themselves, paying no attention to each other and make a progressive mess like Behold… the Arctopus does, but they don’t, they keep it together.  At times, the band reminds me of 1994’s much-loved Tomb of the Mutilated by Cannibal Corpse, but with much more complex elements.  And while the album clocks in at just over 40 minutes it in no way feels short or incomplete, it’s just the right amount for what they’re trying to showcase.

Surprising tidbit: the production quality on this album is amazing. Although death metal and quality production may sound like an oxymoron, I assure you it’s not.  Engineer Darius Szcepaniak really deserves a shout out here: not once does any member of the band get lost in the mix.  It’s insanely clear and everything has its place in the stereo spectrum.  In the world of death metal, that is something very hard to accomplish. In fact, it sounds better than some recordings by some of the big label death metal bands.  This benefits the band by tonnes as the clear sound helps push the heaviness forward, making sure even Jason’s bass solos are not lost and one can enjoy the face melting goodness.  Now, if only other death metal bands would learn that, we’d be clear.

All in all it’s a great album from start to finish but, in the future, I’d like to see the band take a few more risks as sometimes it feels like I’ve heard “this” or “that” before.  And while it does take away from the album, the sources that they are drawing from are in no way bad or sub-par. It would serve the band, however, to further explore their sound, to really become unique in every way, not just in sprinklings here and there. The day that they do will be a very happy one indeed.

Without a doubt this is a very worthwhile album to pick up. If technical brutal death is your cup of tea, make sure give this a sip.

Fates Warning – Inside Out (Reissue)

The Day of the Beast – Relentless Demonic Intrusion