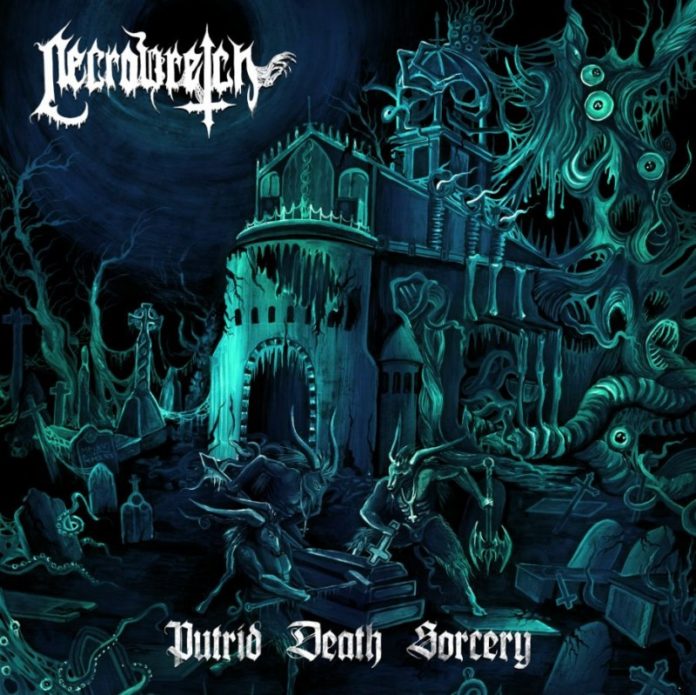 The funny thing about music is that even when everything is right, it can still be off. Maybe you understand, maybe you don’t, but it’s kind of like being on a blind date with a girl (or guy) that just does nothing for you; they’re pretty, smart, funny, but there is still something amiss that you can’t quite put your finger on. No matter how much you try to figure it out, you just can’t seem to identify the reasons for your displeasure. And while it may be a case of mixed signals, there are times when your date just reminds you too much of someone else, or just plain bores you with repetitive stories. In case we’re getting lost within the fog, what I’m trying to say is that Necrowretch‘s new album Putrid Death Sorcery may be a bit of a mixed bag.

Initially, everything seems fine with the album; it starts off decently enough. A straight in the face blackened death metal punch reminiscent of Pest era Gorgoroth, though much tighter and less atmospheric. The sound is a really clean, well defined 3rd wave black metal with a touch of death. Short in nature, the songs focus on more of the “straight-to-the-throat” approach, with lots of blasts, double bass, and assaulting power chords.  It’s doubtful that Putrid Death Sorcery will induct anyone into the darkest of metal genres, but might appeal to die hard black metal fans that like their Death sprinkled with some Immortal. “Impious  Plagues in Catacombs” is easily the best track on the album, showcasing a great diversity within the band to combine both slow and fast elements and has some phenomenal guitar work. It’s insanely reminiscent of a more blackened Indescent & Obscene era Dismember. Ironically, the track showcases everything that’s right and wrong with Putrid Death Sorcery; it’s a winning formula that is rarely applied. If we had more of this, we would have a much better album.

Think of the 3rd wave of black metal; it saw the most amount of commercial attention for the genre and is what is often coined as the point of “over-saturation”. While the era saw many great albums produced many like Pure Holocaust and others, it also saw the majority of what would be referred to as “filler” black metal bands. The over-saturation created a mire of bands destined to be at best, supporting acts. The floodgates being open to anyone, it saw far too much of quantity over quality. Even though most of the bands were insanely talented, more often than not, they produced less than stellar work.

Does all the above apply to Putrid Death Sorcery? Some, outright yes, while others, not so much; while there are some good songs on the album, many of them are repetitive and almost impossible to name by title. By all accounts, Putrid Death Sorcery should work, it just does not make much of an effort to really distinguish itself from its contemporaries. Necrowretch has a winning combination, they just aren’t applying it.

Crucified Barbara – In The Red