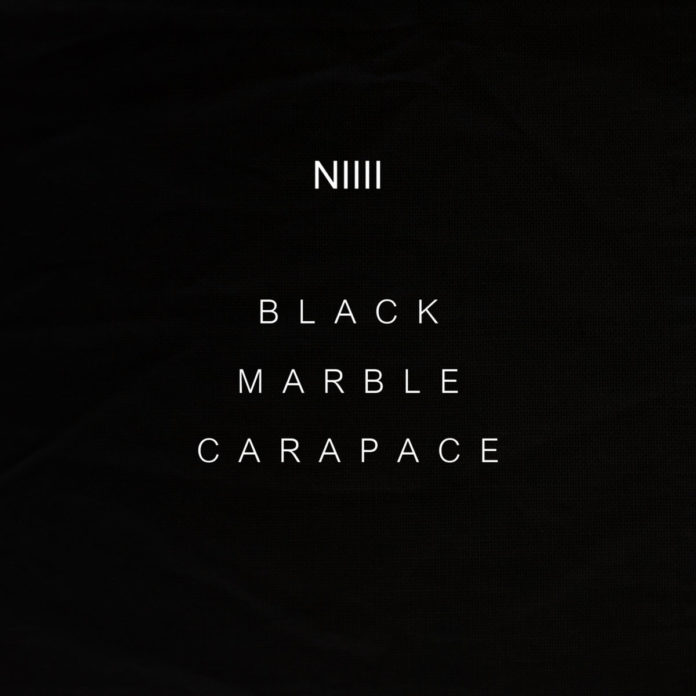 N/ill is the solo project of post-punk project Crystalizer‘s George Pemberton, an artist from Germany who dabbles in the brooding, dark and morose. Earlier in the summer, Pemberton‘s first release, Shut delivered three sombre baritone spirituals which drew heavily from the darker side of the singer-songwriter canon, notably the works of Michael Gira and Jamie Stewart. His new release, Black Marble Carapace shows him expanding N/ill‘s sonic palette to accommodate the influence of ambient, drone, darkwave and a heady injection of ’80s goth.

As its sophomore release, Black Marble Carapace shows a completely different side to N/ill, with most of the tracks being less straightforward and more experimental. While Safe emphasised guitars and vocals, Carapace focuses on electronics as a showcase for the variety of Pemberton‘s work. A heavily cinematic tone carries the listener through the EP, with its high points being the more guitar-driven tracks. Some of the synth compositions at times feel clumsy or misguided, and the production often doesn’t settle too well on the ears (the intro to ‘Hader’, for instance), however when coupled with Pemberton‘s fantastic voice and expressively bleak lyrics and guitar, the songs seem far more thought-out, filled with substance and meaning. The prime example of this being the EP’s standout track ‘Zero Point’, a Tom Waits meets Throbbing Gristle murder ballad driven by hollow bass hits, guitar and disturbing male vocal delivering bleak verses on nihilism and suffering. “There are no thoughts to speak / I swallow myself in the nothingness”. Mr. Pemberton really has a knack for capturing a morose, crushing atmosphere which haunts you long after you stop listening. If darkwave was around in the 1800s, Nietzsche would totally be N/ill‘s biggest fan.

As a record, Black Marble Carapace is patchy at best, however when viewed as an early exhibition into the troubled, disturbed thoughts of a promising new artist, it’s hard not to get excited about Mr. Pemberton‘s future work, picturing it comfortably rubbing shoulders with Planning For Burial, Wreck & Reference and Have A Nice Life. It’s a brave fusion of genres as far apart as singer-songwriter and dark ambient, with the end result being a bold collection of aural juxtaposition.