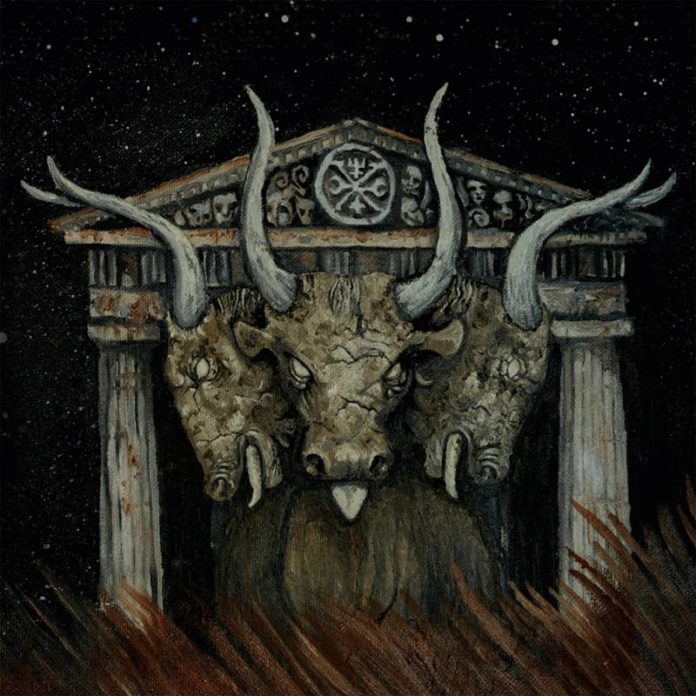 Math rock would seem to be an unlikely source when you think of it in terms of being an influence on black metal. While the second wave of black metal, which for all intents and purposes is the most popular form of the genre, is predominantly Scandinavian, math rock is a predominantly North American style of music. Black metal is bent on crushing the listener with a primal, raw, and stripped down approach, while math rock relishes in its technical prowess and progressive rock sensibilities. So what happens when you merge these two seemingly opposite sounds, you might ask? Murmur is what happens.

Murmur was founded in 2007 in Chicago, Illinois. Their first full length, Mainlining The Lugubrious, was released in 2010, and showcased a young but eager band playing a very compelling and morose but fairly straight-forward version of depressive black metal. Just over a year later they released a split 7” with DeKalb-based experimental black metallers  Nachtmystium, and showed a noted jump in quality, even in such a short amount of time.

Playing with Nachtmystium has had a profound effect on Murmur’s approach to black metal, something that becomes obvious in Murmur, their latest release. There is nothing straightforward about this album, and thank the powers that be for that! Lately, in the North American black metal scene, experimental typically means shoegazey, post-rock oriented black metal, along the lines of Wolves In The Throne Room, or the neo-pagan folk metal sounds of Agalloch. While both of these are great bands, and both have influenced great bands in turn, it is a bit sad to see the lack of “experimentation” in experimental black metal music (it’s not exactly experimental if everyone is doing it). Murmur have incorporated elements of math rock, psychedelic rock, and progressive rock all into a black metal setting. There are so many twists and turns in the structure of each and every song that the listener is left dizzy, though not unpleasantly so. With jazzy time signatures, washes of psychedelic synthesizers, vocals that range from spoken, sung, and shrieked and all in between, virtuoso drumming, acoustic AND electric guitars, the sound is at times very dense, and creates a claustrophobic and slightly unsettling atmosphere.

Murmur’s melancholic sense of melody hasn’t disappeared altogether, but has rather focused in new directions, particularly in the vocals. While there are plenty of harsh growls and shrieks, there’s an awful lot of melodic vocal passages which are every bit as harrowing as the music they’re being sung over. “Bull Of Crete”, the second track, can really encompass the overall album in a nutshell. Clashing notes, pulsing drums that build the tension, half spoken, half shouted vocals, all building into a crescendo that goes into an eerie psychedelic rock progression that is enhanced by synthesizers that sound like the Theremin music you’d hear in a 50s or 60s Sci-Fi/Horror movie. This may sound odd, but in the context of the song it’s pretty compelling (I’ve never heard synthesizers used this way in the context of black metal) especially with the bass guitar and drum throbbing underneath it all, as they give the music a heavy low-end that also has a hypnotic quality to it. The cyclical and repetitive riffing that is so distinctive to math rock is employed here in an unsettling and creepy way, with a feel of barely controlled chaos throughout that is similar to the newer material by Deathspell Omega, or Destroyer-era Gorgoroth. It feels as though everything is going to fall apart and the band is going to lose focus before they switch into an acoustic passage, only to jump right back into a sludgy skull-basher section.

Of course, all of this would be have been for naught if the production hadn’t been done just right, so I’m glad to say that it most definitely was. The atmosphere is captured with a rather murky style of production, giving a a dense quality to the overall sound, as if the tones were drifting in from some distant memory  (Ordo Ad Chao by Mayhem had a similar tone, even if the instruments and vocals are much easier to hear on this album).

The only problem that I can think of with Murmur  really boils down to personal taste, since “kvlt” fans looking for blast beats and Beelzebub in their black metal won’t find it here. Other than that, and especially if like moodier math rock bands like A Minor Forest with some extreme metal thrown in for good measure, this is an album that you should not miss.