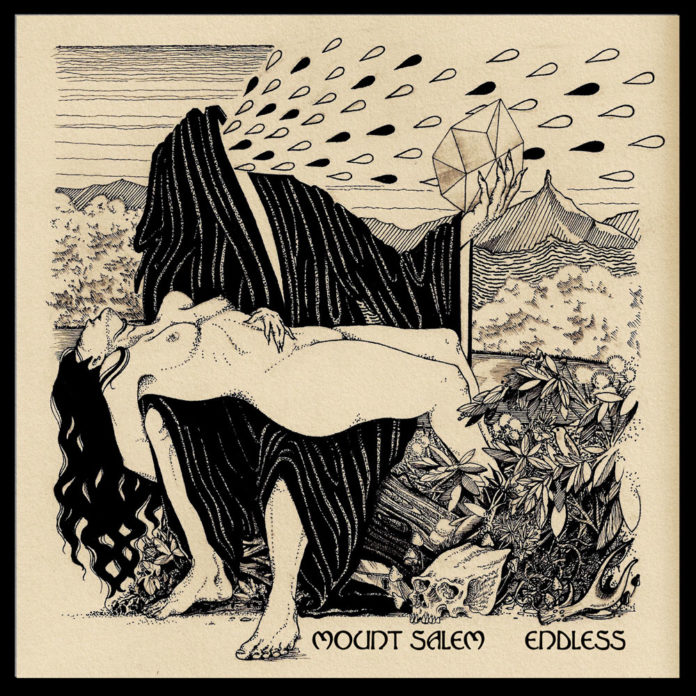 One of my favorite left-field answers to the dreaded “what kind of music do you listen to” question is “caveman music.” It gets a lot of weird looks, but it’s easy to explain. Most of my favorite bands aren’t concerned with technical skill, lofty conceptual goals, or reinventing the musical wheel – it’s all about rocking out with simple, solid riffs, and writing tunes so easy that a caveman could play them. The term also works when you consider how the best doom sounds like something primordial that fossilized aeons ago, isn’t widely known among the general populace, but has a wide and enthusiastic following among a few bearded nerds. When you consider these descriptions, the Chicago doom quartet Mount Salem fits the descriptor of “caveman music” perfectly, for better or for worse.

Before recording their debut album Endless, the members of Mount Salem put down the instruments they’re most familiar with in favor of new and untested implements of destruction. Virtuosity thus takes a major backseat to songwriting, as it should be with most good music, but there are several points at which a little bit of solo showoffs would have gone a long way. Throughout most of the album, the organ played by vocalist Emily Kopplin only serves to augment the guitar riffs with heavy and sprawling chords. It works wonderfully in evoking a ritualistic atmosphere as vintage as your dad’s tasseled leather jacket, but just a bit of keyboard wizardry would have done an even better job of convincing him that he’s having an acid flashback.

Speaking of throwbacks to proto-metal psychedelia, there is a LOT of that on Endless. From the wah-tinged solos and tube amp crunch of the guitars, to the aforementioned Hammond organ, it all sounds very familiar, especially if you’ve been following the recent resurgence of retro-doom from groups like Jex Thoth and Blood Ceremony. Where Mount Salem stand out from the pack is in their songwriting – tracks like  ”Hysteria” and the two-part “Mescaline” suite build, peak, and surge like expertly-crafted doom anthems, and “Lucid” has an earwormy hook that will lodge itself in your head for days. But even with all these excellent ingredients synergizing together – the heavy fuzz of every note, the Hephaestean thud of every drum hit, and the soaring clarion call of Kopplin’s mezzo-soprano – you can’t help but feel a major case of deja vu coming on.

As a first album, however, Endless is an achievement to be celebrated. It’s a complete package with enough for most fans of this style to sink their teeth into, and the moments where it comes up short are still enjoyable; true, it doesn’t bring anything new to the table, but it is done so well that you won’t care too much about that. I’m not looking for a band to reinvent the wheel on their debut release; I just want them to put out an album with plenty of promise that makes me hungry for more. And in that respect, I’d consider Endless a success.