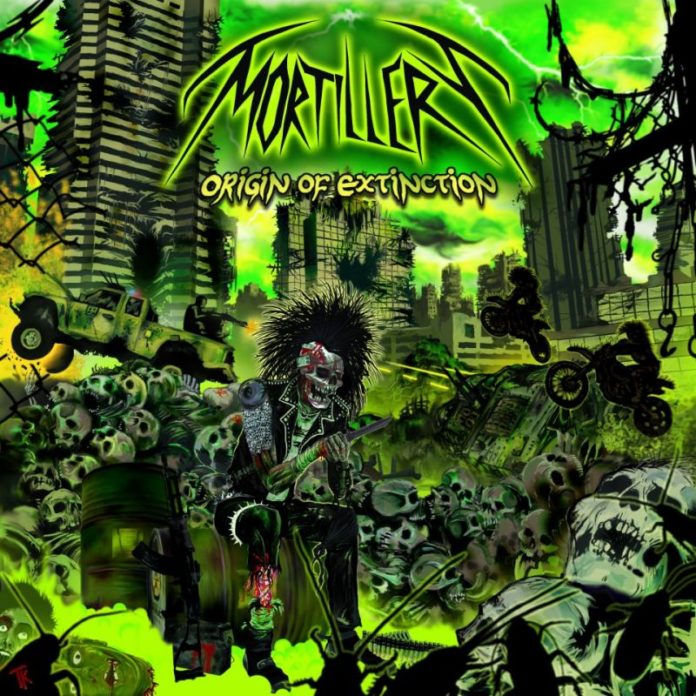 Mortillery are a relatively new thrash band hailing from Alberta, Canada. Their youth is definitely a positive thing, as it is always good to see newer bands keeping the old flame burning, especially in the thrash metal genre. Nowadays, aside from bands like Municipal Waste and Gamma Bomb, there aren’t many bands that are still playing this kind of thrash any more. Keeping the catchy old headbanging vibe without crossing over into more extreme territories isn’t seen very often, as a lot of band seem to be trying to out do each other with speed and brutality.   Possibly from the song names and artwork I was expecting it be a lot heavier than it actually was and it took the time before I could accept the album for what it ACTUALLY is: a good, sizeable slice of energetic and actually quite interesting thrash.

The main thing that stops this album from being really great is the lead guitar work: While all of the songs just cry out for some really epic Alex Skolnick-style solos, we only get very basic, and sometimes even (apparently) out of key, shredding which doesn’t even match up to even the poorer Kirk Hammett solos. From listening to the complicated riffs you can quite easily tell that the guitarists are both very talented and probably quite capable of doing better, so hopefully on their next album they will spend a bit more time and focus on writing some more up-to-the-rest-of-the-album-standard lead work.

The vocals are a definite shining light in this offering, particularly on the tracks “No Way Out” and “Creature Possessor”, and it’s actually only whilst cross referencing this review that I’ve managed to figure out that the vocalist is actually a woman. I’m actually more surprised by this than the first time somebody told me about Angela Gossow: Really letting it rip with some excellent thrash, wailing alongside coining vocal structures that just aches to be screamed along to, she is probably my favourite part of this whole album.

I’ve had to listen to this album many times before writing this review and it took me a real long time to get to grips with it before deciding whether I actually like it at all or whether it bored the absolute crap out of me. As it turns out, it’s actually pretty damn fine. It’s definitely a grower, so you need to be patient and give it a few listens before coming to any decisive opinion.

Overall, if thrash is your thing then you’ll probably love this album pretty hard. As I say, it’s a bit of a grower so take your time and be generous with your listenings, and I’m relatively sure that you’ll come to the same conclusion that I have: a hard hitting album from a band that have a lot of potential and could, with a small amount of refining, lead at the forefront of modern thrash bands that keep it (a bit) retro.[signoff predefined=”Signoff 1″][/signoff]