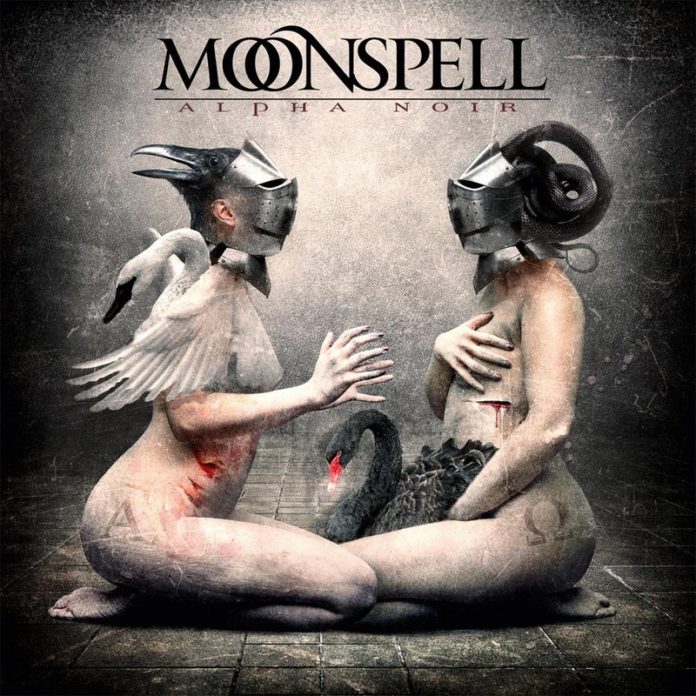 Moonspell has always been quite an enigma. Not quite black metal enough to entice black metal followers and not quite light enough for the casual metal listener. That is, if there is such a thing as a ‘casual’ metal listener. But, I digress. The latest offering from the Portuguese quintet Alpha Noir manages to sit contently (albeit awkwardly) in that exact spot. While it may the spot that the band was aiming for, it’s hard to say whether or not it was a success; there are definite ‘moments’ on the album that are worthy of noting, but it may not be enough to pull you through the experience..

With an opening track like “Axis Mundi” everything seems to be off to a solid start. But as the album progresses, things have a hard time keeping one’s attention for an extended period. The tendency to switch from their more blackened sound to the slower gothic metal sound really damages the listening experience for me. While some people like their fast black metal interrupted with a serenade by Dracula, I cannot say I’m one of those people. The reason is that this change seems to happen at the worst times; just when Moonspell hit their groove with a nice and heavy riff, they stop it for a slow and moody interlude. It’s unfortunate, because when rocking away on tracks like “Grandstand” and “Lickanthrope” it really detracts from the listening experience when they slam on the breaks. It’s sudden and not all too pleasant. Think of it kind of like a racehorse stopping mid way through a gallop. This impacts you as both as participator and spectator; as a participator, the sudden drop in tempo thrusts you violently to the ground. As a spectator, it’s like immediately switching from a Lamborghini to a Nissan; the change is less than smooth and in contrast makes for a lesser experience. If you have people’s heart and blood pumping, why slow it down? Why not have their gothic sound only on the slower tracks? The transition would be a lot smoother.

The simple shame is that as far as singles go the album is strong; Alpha Noir will without a doubt be a success in terms of promoting the album. However, it will present a totally different picture when the album is listened to as a whole.  Again, this is not something that happens because of lack of ideas or bad musicianship, it’s a simple case of  “if it’s not broken, why fix it?

Obviously, some genres don’t mix well: polka with metal, and blue grass with rap.  Does black metal and goth metal fit into that? No. It’s a tricky dance to pull off because it’s all in the execution and that’s what this album does wrong.  Take Type O Negative for example; their changes are smoother and more pleasing to the ear because they rarely switch from their faster metal style to their slower metal style; usually it’s the slow trudging riffs followed by the slow piano parts. Why? Because, it works.

What Moonspell is doing is nothing new, nor even strange. It’s just that there are albums that better handle the transition between these genres; even Moonspell’s own earlier album The Antidote is a great example. Is Alpha Noir bad? In a word, no. It’s just simply brought down by arrangement. Is the album recommendable? Let’s just say, it’s a steep mountain to climb, but it may just be worth it for some. However, odds are you may not feel satisfied at the end.