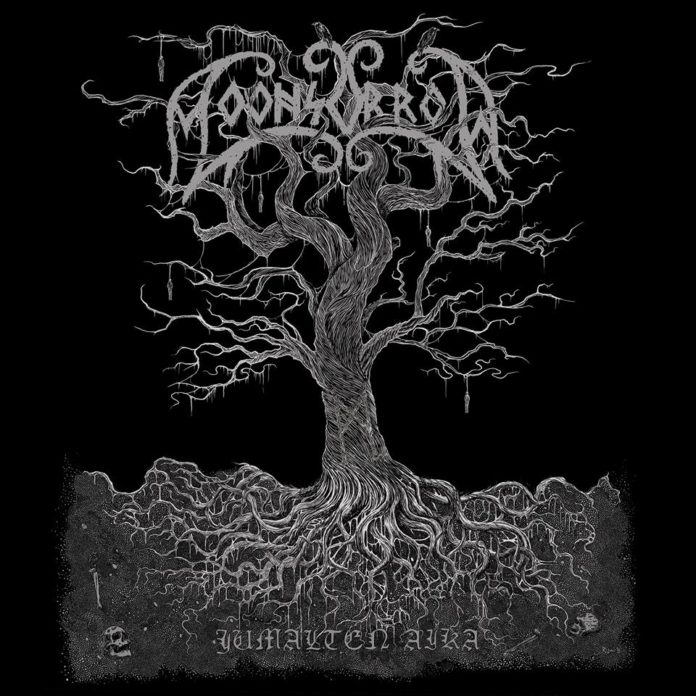 I’ve never listened to Moonsorrow before Jumalten Aika. I fell off the folk wagon for a while last year, and, like many others, I’m still waiting out in the cold for Wintersun’s Time II. Sticking to ancient tradition and shunning the upbeat, whimsical style staple to folk, can Moonsorrow grease the wheels on my folk wagon, or will they drive it further into the ditch?

Moonsorrow waste no time crushing their audience with mammoth power. The album begins with a huge wall of sound supported by mounting guitars, exploding percussion, and a choppy bass, when suddenly the wall falls and the band tears away with ferocity and aggression. These crushing moments are peppered throughout the album; there is passion in the construction and glee in the destruction. Decimation is just one of the key elements in Jumalten Aika. Soaring drama in choral pieces and broad arching tones cut the tension and adrenaline, while acoustic guitars craft melodic and subtly complex moments that provide even more contrast to the brutality. There are also sections of what I can only describe as “Pagan ritualism,” brimming with chanting, simple, rattling percussion, and a fire crackling. Such elements often result in a performance that is cheesy to the max, but Moonsorrow work hard to wind a mesmerizing mood and atmosphere that fits the ritual perfectly. Despite the stark differences in the components of the sound, none butt heads; instead, they work together to create a dynamic performance.

Strong concepts are not all Jumalten Aika has to offer. The construction of the album is seamless; song after song roll into one another with no discernible break outside of a shift in tone. Even though the album clocks in well over an hour, the whole thing flies by in a whirlwind.

Because of my lack of knowledge in Swedish, I can’t understand the lyrics, but it doesn’t affect the album’s storytelling and atmosphere. The sinister side drags the listener through the dark underbrush of a forest, before blasting them over a misty mountainside, landing them around Moonsorrow’s bonfire where they’re invited to join the band in their ancient ritual.

Jumalten Aika is a beast of an album that peels away to reveal layers of complexity and melody. Between the crushing walls of sound rest the shadowed valleys of acoustics that lead to mysterious groves thrumming with chants and rich storytelling. There is a lot of love and care forged into the construction of the album and its numerous twists and turns. A seamless listening experience is the result of careful measures and thought-out steps. The atmosphere and mood alone are powerful enough to tell a story, and I imagine the lyrics would only enrich it further. For folks who dig folk, or just a strong metal act, Jumalten Aika has something for both crowds.

IN A NUTSHELL
Do you like folk and metal? Give it a spin!
POSITIVES
Dynamic mashup of elements.
Strong imagery and storytelling.
NEGATIVES
I'm a dummy and don't understand Swedish.