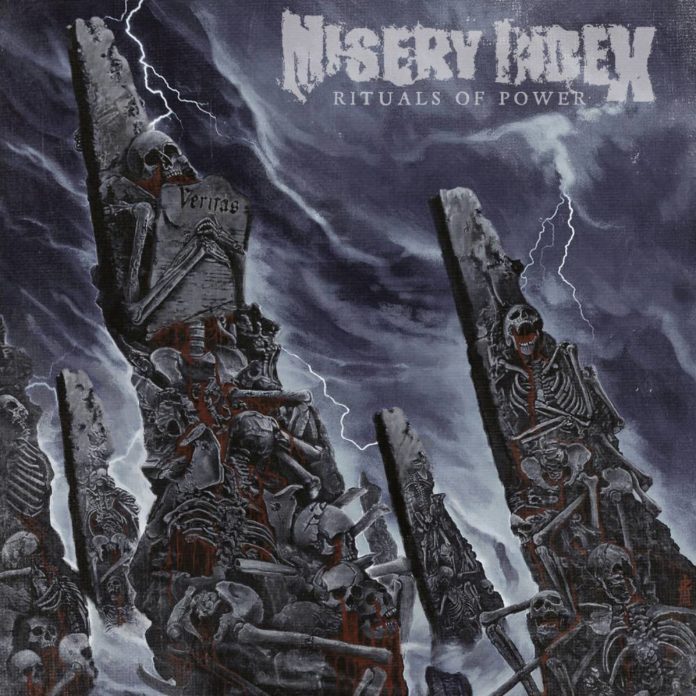 Grindcore has always had a political edge to it, thanks in part to bands like Napalm Death and their anarcho-punk roots. Although as some grindcore bands started blurring the lines between grind and death metal, some of the political leanings took a backseat in favor of splatter-movie inspired lyrics, and general misanthropy, this wasn’t the case with Misery Index. Indeed, they are one of the few deathgrind bands from the 2000’s that looked back to the political roots of the subgenre, writing a number of songs critical of modern society and culture.

It has been 5 years since Misery Index’s last full-length release, The Killing Gods, and quite a lot has happened in the political and cultural spectrum since then. All of these events certainly contributed to the attitude present on Rituals of Power, an album that finds Misery Index as sharp as ever, with barbs pointed at censorship, corporate greed, social media activism, and other hot-button issues. One song that really stands out is “New Salem,” which takes shots at the political extremes, criticizing them for creating echo chambers and causing more division, asking “Do you fight the good fight, or instigate the fighting?”

Some of you might be thinking: “Who gives a shit about politics?! What about the music?!” Well, Rituals of Power marks a return to the grindier side of Misery Index’s sound. Blinding speed, blast-beats galore, and some fairly groove-oriented riffs are the name of the game here. The guitarwork isn’t overly technical, though there are some pretty ear-catching solos on “Rituals of Power” and “I Disavow,” which are the most overtly death metal-oriented tracks of the bunch. Still, there isn’t a whole lot of melody on this album, though there plenty of time changes, giving it a pretty solid range of dynamics.

For the most part, the production is pretty consistent, though tracks like the  “Rituals of Power” and “I Disavow” sound like they came from a different recording session. Still, the tunes are solid enough that the quality never really becomes a reason to not enjoy the album. The blasting bass drums on “Universal Truths” gets a little tiresome, particularly since the guitar riff kind of meanders a bit, and always feels like it’s about to build into a really brutal breakdown that, sadly, never pays off.

With Rituals of Power, Misery Index have crafted a pretty decent record, demonstrating that they are still a force to be reckoned with in this genre. This is a perfect album for those grindcore fans that want a little more groove and politically-sharp lyrics in their music.

Misery Index - Rituals of Power
Misery Index are back with a hard-hitting new grinding slab of politically conscious metal
Reader Rating1 Vote
Biting lyrics that leave no target unscathed
Ferocious, grooving riffs, tailor-made for beating your buddies senseless in a mosh pit
Good range of dynamics in tone and speed throughout the album
The production isn't as even as it could be, with some tracks sounding like they were recorded in a different studio
Intro track meanders a bit
Misery Index are going back to a slightly more grindcore-oriented sound, which might turn off some of the more death metal-leaning fans
4