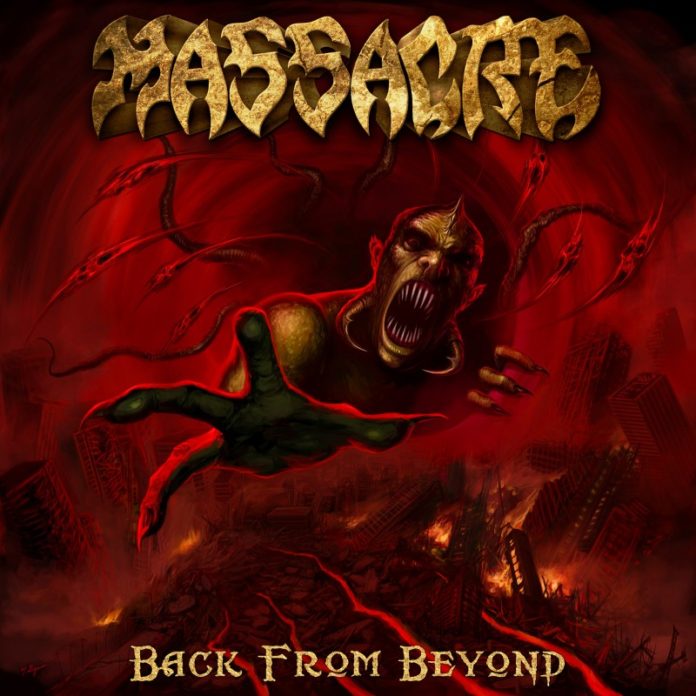 Massacre are a band that have been a part of the legendary Florida death metal scene in various forms since the mid-80s, and members (past and present) have played in such notable acts as Death, Obituary, and Six Feet Under. After releasing a handful of demos and going through various initial line-up changes, the band formed it’s classic line-up of Kam Lee on vocals, Rick Rozz on guitar, Terry Butler on bass, and Bill Andrews on drums, which then proceeded to release the debut full-length From Beyond, and the follow-up EP Inhuman Condition. The band went their separate ways shortly after the release of the EP, though there have been various reunions, and even another full-length release (though it’s a Massacre album solely by name, and is often overlooked by hardcore fans). But the original Massacre, it would seem, was destined to be a footnote in death metal history.

Terry Butler once again teamed up with Rick Rozz to reform Massacre in January 2012, and after releasing a 7” EP, Massacre has ended the 22 year wait and released a brand new record, Back From Beyond. I have to tell you, the wait has been well worth it. The album intro might put some at unease due to its somewhat symphonic tone, but any fears that Terry and company have changed their tune will be quickly dispelled by the might of “As We Wait To Die.” This is vicious, bare-bones death metal in its most primal form. Don’t expect sweep-picked guitar solos, jazzy time signatures, or keyboards; this is an early 90s thrashy death metal album made by musicians that were around for the original wave. There are many similarities to Death, particularly the Spiritual Healing and Leprosy eras. This seems like too easy a comparison to make, especially since Terry Butler actually co-wrote most of the songs on Spiritual Healing, but that doesn’t keep it from being an accurate description. There’s also hints of Terry’s other famous band you might have heard, Obituary, particularly on the track Succumb To Rapture, which has a really groovy riff and even slows down in a couple of spots.

Longtime fans may be a bit disappointed that Kam Lee and Bill Andrews aren’t present, but Ed Webb (vocals) and Mike Mazzonetto (drums) are both more than capable of filling their predecessor’s shoes. Ed’s vocals have a very impressive range in tones, spanning from the standard guttural growls found in death metal to high-pitched shrieks and everything in between. The musicianship is super tight, and if you didn’t know better, you’d think this line-up has been a working unit for a much longer time than they’ve actually been together. The production is super clean, without sounding over-digitized; producer Tim Vazquez has successfully captured the essence of the band’s sound and the album couldn’t have been put in more capable hands. Back From Beyond has a sense of rage and sincerity that many younger bands can only hope to attain to, and Massacre have proven that death metal is no young man’s game. They’ll gain themselves some new fans with this latest effort, as well as please the old guard. But Back From Beyond isn’t without fault and may fall just a little short of being absolutely glorious, though the fault falls more on the times than it does on the musicianship and songwriting. We live in a time where technicality rules the day. Bands like Decrepit Birth and Psycroptic are the kings, and Massacre, while every bit as heavy, fall woefully behind the times in the song-writing department. Terry Butler and Rick Rozz both come from the 80s and 90s death metal scene and don’t stray too far from the conventions found in the bands of that era. This leads to the album feeling one-dimensional at times, and there’s not a whole lot of changes in pace. In order to keep from getting monotonous, I feel there should be more dynamics in the song structure, but you don’t really get that here.

Overall, Back From Beyond is a solid death metal record that deserves a spot in any true death metal fans’ collection, and certainly will receive plenty of replays in my headphones. While it may not be an absolute masterpiece, Massacre have pulled out all the stops on this latest endeavor, and have again established themselves as true ambassadors of the Florida death metal scene.

Drudkh – Eternal Turn of the Wheel