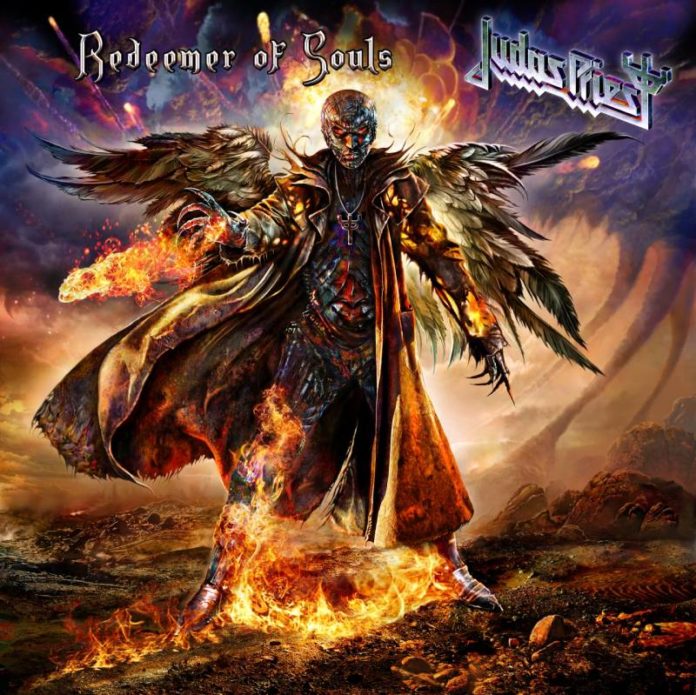 In the 40 years since Gull Records launched Judas Priest into the world with the low-key Rocka Rolla, they have given the metal faithful one very wild ride. The metal gods may not have invented metal, but they undoubtedly purified and defined it. Yet, from that first progressive and psych-tinged album, they have never rested on their laurels and made the same record twice. Never have they shied away from expanding and experimenting with what it means to be a metal band. With this in mind, I find it fitting that Redeemer of Souls, their 17th studio album, should seem so much like a combination of their early, primal statement Sad Wings of Destiny, and the doom-laden, mechanized crunch of 2004’s Angel of Retribution. It’s not that the album could be mistaken for either of those releases, as it has its own unique pace, coupled with the guitar playing of Richie Faulkner which has given a new dimension to Priest‘s unique structural sensibilities. Where K.K. Downing was the experimental Hendrix to Glenn Tipton‘s more bluesy Jimmy Page stylings, Richie‘s playing feels like that of Iron Maiden’s Adrian Smith, known for his sense of melody and drama. The result is a smoother, less overtly “in your face” guitar interplay that interacts with the rhythm section in a way that is entirely new for Judas Priest. Though K.K. will always be missed, Richie has proven to be an inspired choice to fill his vacant spot.

Mike Exeter has treated Redeemer… with a full, rich production that is as unique as the new guitar dynamics. While every Priest album since Painkiller has shared a punchy and bombastic aesthetic, the tones here seem to fill the spaces in the listeners’ head more than batter it around. While I’m sure some people may long for an Andy Sneap thickness, I feel that this production is a unique one that will set it apart from the competition.

At times the album sounds like a love letter to fans who have invested themselves in every moment of this band’s trajectory. Be it on the opening riff of “Metalizer”, which slashes with Painkiller power, or on “Crossfire”, with its blues-based stomp that recalls Sin After Sin‘s “Raw Deal”, the band didn’t try to hide that 40 years of history played in to this album. The time is also evident in Rob Halford‘s vocal chords, and he has proven to be a master at working with his aging throat to produce deep, earthy tones that sound closer to the blues than to the Pavarotti inflections he was using on Nostradamus.

Is it the best album of the band’s catalogue? No. It’s a little longer than it needed to be, with one or two songs not measuring up to the overall excellent quality threshold. Plus, Rob is simply not the same voice he was on Stained Class, Defenders of the Faith, or Painkiller. He’s noticeably dialed back on the falsetto screams, and while they can still be found throughout the record at the right moments, they are few and far between. Unfortunately, that’s what happens when you, as the man himself has said, “scream your fucking throat out,” for decades on stage. Even now, at 62 years of age, the metal god is still one of the best in the business.

Although anybody can see that this is a band with nothing left to prove, they have opted to go out and prove it anyway. While some people have accused Priest of “pulling a KISS” by going back on their retirement plans, I look at it this way: KISS went back on their plans only to release two assembly-line, mediocre records; Priest went back on their retirement to craft their best album in over 20 years. KISS‘ new members were told to play in the style of their predecessors; Priest‘s new member inspired the rest of the band to write material that is unique, interesting, and different from what they’ve written before. If KISS can sell out stadiums with the same old ideas, Priest should be allowed to tour with fresh inspiration, a renewed fire, and outstanding new material to promote.

Check out our interview with bass guitarist Ian Hill.