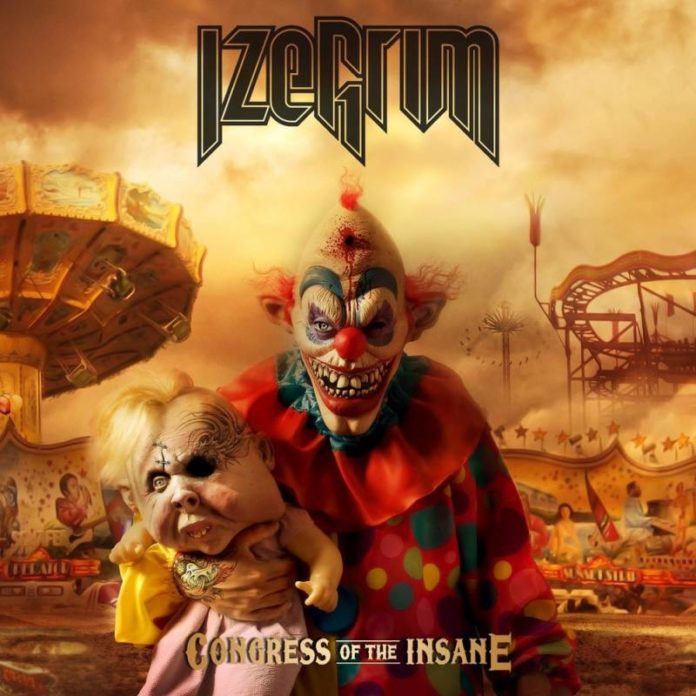 I’ll admit, I’m kind of a sucker for straight-up death metal. So when I saw a new Izegrim album on our list of upcoming releases that we could review, I took an immediate interest. I remembered their last outing, Code of Consequences being surprisingly good (I had never heard of them before that album), if somewhat flawed. The mix of classic death with a sprinkling of thrash thrown into it was just too good to pass up. So does Congress of the Insane address any of the problems I had?

Well for the most part…yes, if only in baby steps. Izegrim offers up a catchy old-school death metal sound with thrash accents. The result is about what you would expect – big riffs and scintillating leads everywhere. If it’s one thing I have to give Izegrim credit for, it’s that they have a damn good amount of riffage on this album that not only serve to just sound bad-ass, but help move the song forward and into directions that are sometimes unexpected – something that a lot of bands leave up to the drums. The song “Endless Strike” makes a good example, starting off fairly bog-standard until everything takes a 180 with some great fretwork about a minute in. Little moments like this help Congress of the Insane stand out from the crowd of other death/thrash combo bands. It also helps that Congress of the Insane never seems to stop to take a breathe; there are no “slower” songs on this release, and in this case that’s a great thing. Izegrim seems to work best when they’re given free reign to tear through songs at near-breakneck speeds, and that’s mostly what happens here. Brief moments of pure instrumentation sometimes help space things out a bit, but they’re never too long or steal the show in any way. Izegrim really seems to know how to “pace” out a song, a skill that some other bands could definitely use.

The main problem I had with Code of Consequences, inconsistency, is somewhat addressed in Congress of the Insane. It’s true that this is a stronger album throughout, but some puzzling moments still appear. The intro of “Modern Day Freak”, for example, is pretty damn bad and comes out of absolutely nowhere. There is no precedent for anything in that “tone” to happen before in the album, and nothing else like it happens afterwards either*. Also, for as much praise as I’ve heaped upon the guitars in this review, the drums were a little…disappointing, I guess? They don’t seem to have a lot of jump to them, and seem to mostly serve as background noise. Perhaps it’s partly due to the production, but they just aren’t very noticeable most of the time unless you’re actively trying to listen to them.

If Izegrim keeps their current pace up, eventually they’re going to have an absolutely killer record where everything finally comes together. As it stands now, Congress of the Insane is a good album with a few little problems. Anyone who’s a fan of straight up death metal, and likes the idea of a little thrash influence to go along with it should definitely check this one out. A few songs have already found their way onto my driving playlist.

* No, I did not forget about the album art. It’s just, that tone and setting so far wasn’t depicted in the actual music up until that point.

Lucis Absentia – To The Depths