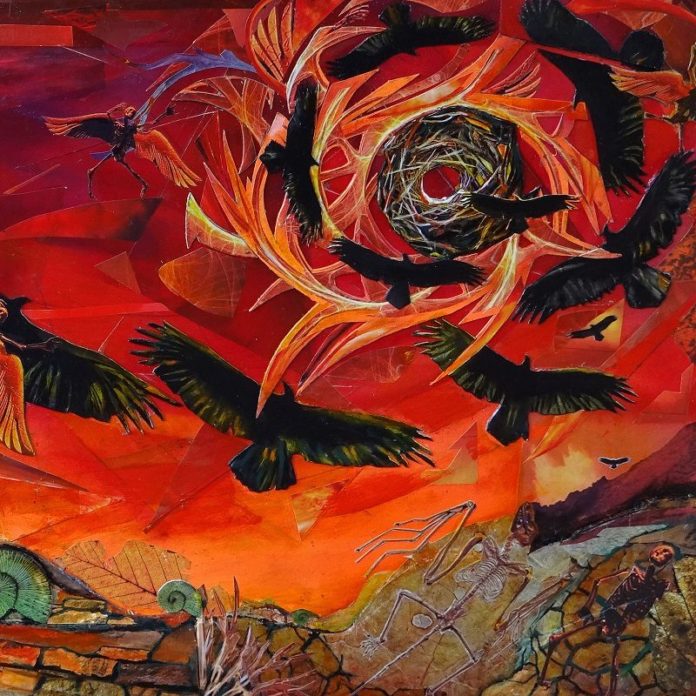 The Direction of Last Things is not only the fifth album to come from Intronaut, but also,  as they point out in their press release, one for which the recording process took just four days. Thanks to regular rehearsals prior to heading into the studio, there’s little sign of the sloppiness that might be expected from such a short recording time, but they do keep a sense of impromptu energy intact from the hurried performances.

The music is mainly a blend of technical metal and prog, with pop and death metal lending near-equal extra seasoning. At times there’s also a Destrage-like incorporation of electronics into the flurries of beats and sweeps. The whirling head-space of the influences is in line with the musical product, which bounces and bashes into different modes as though someone would be electrocuted should the band stay in one style for a full minute. This means that if you’re here to hear Intronaut show off their chops in fusion, rhythm layering, and speedy transitions, it will most likely meet your desires; conversely, however, if you want something a little more grounded or consistent in its form, the giddiness may prove too off-putting for full engagement.

Either way, acknowledgment of the band’s complex song-writing and tight execution can be made without too many reservations. Sure, the high-speed stuff (which heavily outweighs the band’s stabs at emotional crooning) may all blend together into a soup of yelling and tangled beats if you’re not following along with careful ears, but it is clear that significant effort went into assembling the contents. Even if the drummer’s work sometimes has all the pattern clarity of a microwaved bag of popcorn, he’s clearly playing like crazy,  something that, at least at one point, was mapped out to mesh with everything else.

That’s not too far from being a summation for the whole album. Hard work and careful planning went into this, and with attentiveness enough of the obscuring noise can be sifted through to get to those original impulses (heard more clearly in the infrequent ‘calm’ sections); the biggest hurdle though is just getting to that point.  It feels as if the band is focusing more on what they’re capable of including than on which inclusions make for a compelling product, and it’s their own skill on the technical side that’s hampering them. Call it “Malmsteen Syndrome“ if you want, but Intronaut deserve their due, at least for sheer effort.  Hopefully they’ll throttle back on the self-indulgence for their next go-round, but there’s still quite a bit of material on this one to make it worth the time to investigate.

IN A NUTSHELL
Too frilly for its own good, but some solid work underneath it all
POSITIVES
Technical show-casing, impressive drum-work, lots of playing around with overlapping rhythms
NEGATIVES
A tendency to let flash draw their attention away from providing substance
4