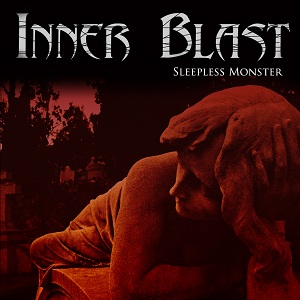 Female-fronted goth bands are a dime a dozen. The early 2000s, with Within Temptation, Nightwish and Epica becoming big names in the genre, inspired a whole generation of musicians to give it a shot with this type of music, with different levels of success. Inner Blast, a young band from Portugal, is one of those who tried.

Before going into details about the album itself, it must be said that in terms of production the EP is truly awful. The quality of the songs becomes secondary due to the poor production and mixing. Liliana’s voice seems to have been recorded over a telephone (it’s so bad that I thought that maybe my headphones were broken) and the instruments have the quality of early Burzum albums. Because of this, I was surprised to read that Sleepless Monster is actually being re-issued, even though the logical thing would have been to re-record the whole thing to make it, you know, listenable.

In terms of musical quality, Sleepless Monster is nothing special. While Liliana‘s voice seems to work well on “Tears”, in others it just comes off as horrible, with her trying to reach notes that are well beyond her range (case in point, her attempts at a more operatic voice in “Fixation”). The melodies are not very remarkable and, sadly, they sometimes come off as a repetitive re-hash of Nightwish‘s b-sides.

Together with “Tears”, “Open Minds”, the closing track, is the high point of the EP. The track starts with a wonderfully-used sample of Howard Beale’s speech from “Network” and then goes into a faster and more “epic” melody (although very reminiscent of early Nightwish). Liliana‘s voice is not up to the task though, and it falls through.

While it is impossible to make a fair assessment of the quality of the music without having a properly recorded album, I find it hard to believe that some of the biggest issues (e.g. Liliana’s range and the derivative melodies) would be solved by this… But you can always hope.