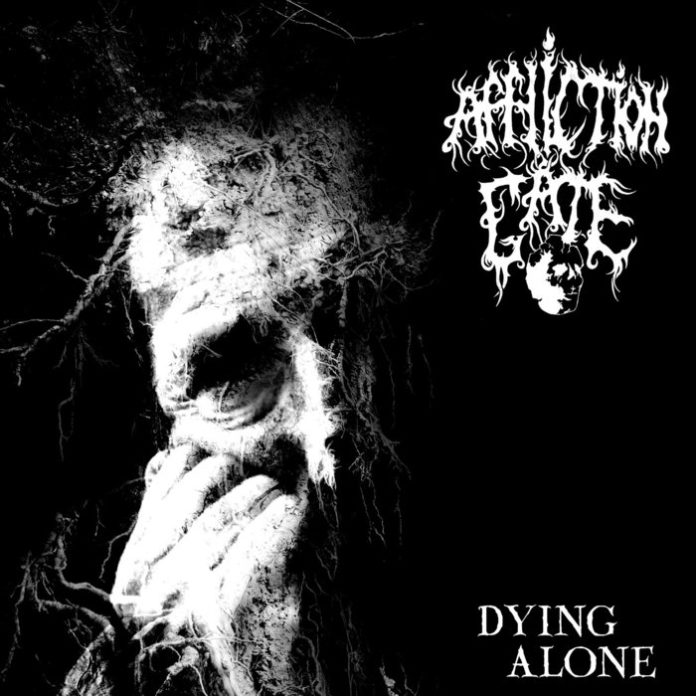 This new EP from Affliction Gate starts off hard and fast, and stays there for about 95% of the run-time (about 20 minutes divided among four songs).  Although the band sets a fast pace of pummeling beats, gruff growling, and intense work from the guitarists, there’s some missing element that seems to be holding them back in their work to elevate themselves past the usual execution of tech-death.

There are quick break-downs of noodliness that come across as practically relaxed in comparison to the standard jack-hammer assault they have going, but those moments come rarely enough to keep their burst-in surprise from getting stale.  The vocals are actually a little less rough than those of some similar bands, though they’re still far-removed from the realm of clean singing, landing in a zone where moving in either direction would probably serve them better.  While submerged layers of activity with guitar texturing add extra punch to the proceedings, apart from that there doesn’t seem to be much to distinguish them from your average (competent) tech-death band.  The howling guitar-work on “Devising Our Own Chains” provides some of the more divergent riffing, though it too is mixed down too far to really seize the moment.

The biggest shortcoming here is that while you might expect to hear at least one track on an EP that steps away from the band’s usual style at least a little bit, here it’s basically the same thing from song to song.  Most of the changes are embedded in the break-downs, lasting about five seconds at a stretch, and the track/EP titling don’t add much distinguishing character to the proceedings.

Aside from these compromised qualities, they play the style well enough to put them on par with the likes of Fleshgod Apocalypse and Hideous Divinity, and their drummer (credited as Laurent M.) does a thoroughly impressive job in his role, giving a strong shot at establishing himself as the band’s stand-out member.  If battering percussion, quick-change riffs, and roiling rhythms are what get you going, you’ll probably want to give this quintet a check.

Fates Warning – Inside Out (Reissue)