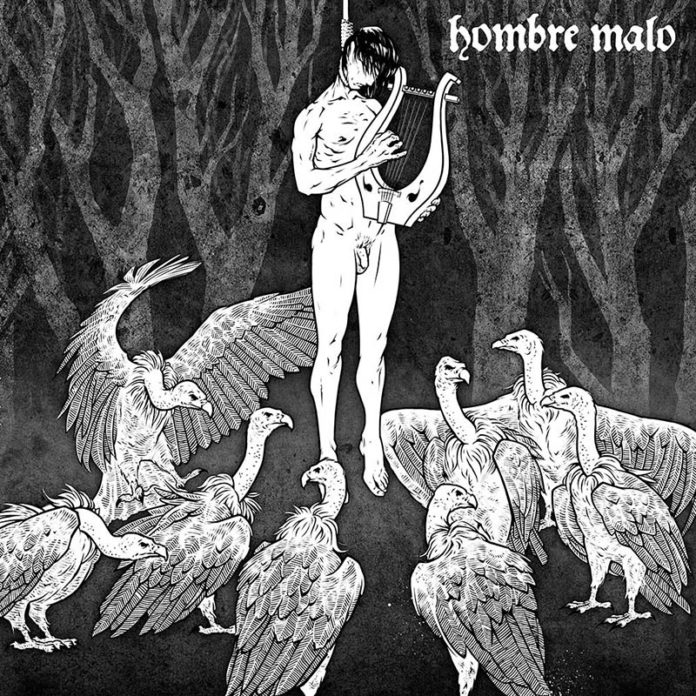 Like every genre, sludge is a bit of an umbrella term now, as it has been used to describe bands at diverse as Eyehategod, Mastodon, and even The Melvins. Sure, not a single one of those bands sounds like the others, but there are certainly some common threads; a love of Black Sabbath style doomy riffs mixed with elements of hardcore and punk rock, all played at thunderous volumes. Each regional scene has its own unique take on the genre, and bands often crossover into other styles of heavy metal, and have even been known to go into more progressive rock territory, particularly bands like Mastodon and Baroness.

Hailing from Oslo, Norway, Hombre Malo plays a raw, rather abrasive version of sludge/stoner rock, with one foot firmly planted in old-school hardcore as well. On the band’s latest effort, Persistent Murmur of Words of Wrath, The guitars are super-fuzzed out, the bass and drums are rumbling and deep, and the vocals alternate between gritty punk-style singing and painful howls. There’s a distinctly “90’s” vibe to the more rock aspects of the music; I’m often reminded of noise-rock bands like Unsane and Today Is The Day, but with a little more stoner/sludge added into the mix. “Vladislav” stands out as a favorite track; fast and furious, “Vladislav” pummels the listener with hardcore-infused sludge along the lines of early Coliseum, and sounds like it could be a release on Deathwish Inc, the label belonging to Jacob Bannon of Converge fame. There are some straight-up rock and roll moments as well, like the album-opening riff on “L’Etranger,” which has some vocals that are half sung, half yelled, before taking off into some angular melodic hardcore riffs and screamed vocals.

The production and overall tone of Persistent Murmur of Words of Wrath is gritty, and slightly lo-fi. The fuzzy distortion on the bass and electric guitars give Hombre Malo a dirty sound, which is right on par with the majority of the stoner/sludge scene. Everything is up to volume 11, and the vocals have a little distortion to them, giving the record a little extra atmosphere. If you’re a fan of Unsane, The Melvins, or Kvelertak, give Hombre Malo a spin, and be sure to play this stuff as loud as possible for greatest effect.